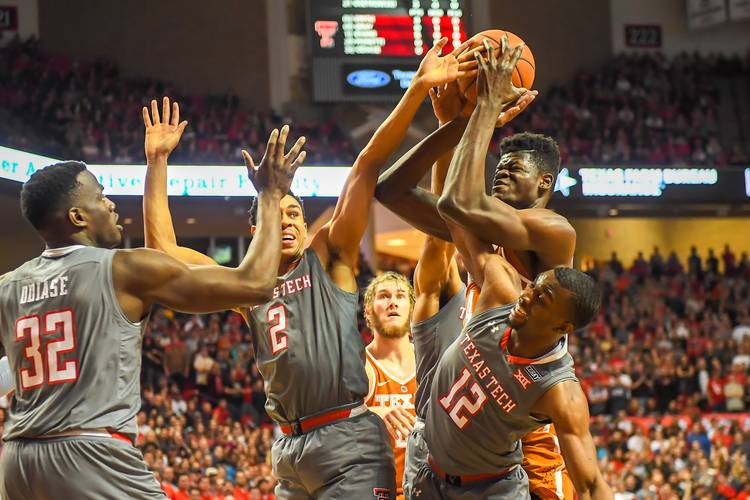 Mohamed Bamba #4 of the Texas Longhorns grabs the rebound from Zhaire Smith #2 and Keenan Evans #12 of the Texas Tech Red Raiders during the first half of the game on January 31, 2018 at United Supermarket Arena in Lubbock, Texas. (Photo by John Weast/Getty Images)

LUBBOCK — It had all the makings of one of the gutsiest performances of the year for the Longhorns.

Texas appeared to overcome Mo Bamba’s left knee injury, Dylan Osetkowski’s twisted ankle and the Horns even climbed out of 13-point, second-half hole. But Texas Tech’s Keenan Evans got his team into overtime, and the Longhorns ran out of gas — not to mention players.

With Bamba, Matt Coleman and Jase Febres on the bench having fouled out, Texas Tech could pick away in overtime and came away with a 73-71 victory at United Supermarkets Arena. Keenan Evans hit the game-winner just as time expired, a stunning 18-footer over Kerwin Roach II that sent fans into another stratosphere.

Jarrett Culver’s running dunk from the baseline gave Tech (18-4, 6-3 Big 12) a five-point lead in the extra frame. The Longhorns (14-8, 4-5) had watched a five-point lead in regulation slip away. But Roach swished a 3-pointer to keep Texas close. Then, he banked another 3-pointer off the glass after a wild scramble. That merely tied the game, though.

Tech had the final shot. Evans came down the floor, went in to get Roach off balance and pulled back for the jumper. It was a dynamite capper to his scintillating 38-point performance. Most of that came at the free throw line, though. He was 18 for 20 at the stripe as the Horns had foul problems all night long.

This was setup to be one of the best come-from-behind wins in Shaka Smart’s three seasons. But Coleman missed three free throws with 2:33 remaining and then promptly drew his fifth foul seconds later. Roach took over the point guard duties and quickly found Bamba for a dunk. Tech got back within one when Evans got Jacob Young in the air for a foul. Evans hit all three free throws and the Horns’ lead was slim with 49.1 seconds left.

Texas let the game get away get completely away at West Virginia and lost by 35. The Red Raiders were threatening to pull away midway through the second half, but the Horns hung tough. Bamba hit a 3-pointer, and Osetkowski hit two free throws after a Tech foul. Eric Davis Jr. swished a 3-pointer with 7:42 remaining, and Texas was back within five.

Davis hit another 3-pointer, and then Coleman hit a step-back jumper. Suddenly, the game was all tied up with 5:55 remaining.

The Horns turned up the defensive pressure, and Roach forced a turnover. He quickly flipped the ball to Febres, who threw down a running one-handed jam. Texas suddenly led 59-57 with 4:12 remaining.

The officials were allowing epic car crashes in the lane, but minor touching was disallowed. Texas’ Jericho Sims, Davis and Febres were all called for fouls in the full-court press. At least Febres got his money’s worth with 46 seconds left when he just shoved his player out of the way.

By halftime, Febres had three fouls while Bamba, Coleman, Davis and Sims all had two each. Tech was 10 for 15 at the free throw line as a result.

Bamba was going to smash the school’s blocks record at some point this season. He swatted away three shots in the first half and broke the UT freshman mark (Chris Mihm, 90, 1997-98). At that point, he needed just one more to tie Chris Owens for the season mark (92). He got two more in the second half and took over sole possession of the UT single-season blocks record.

Texas returns home for a huge day weekend at the Erwin Center. ESPN’s “College GameDay” will be in Austin on Saturday. Doors open at 9 a.m. and the show begins at 10 a.m. Fans are encouraged to stay and attend the UT women’s game against TCU, which begins at noon. Then, Texas will host 12th-ranked Oklahoma at 5:15 p.m.