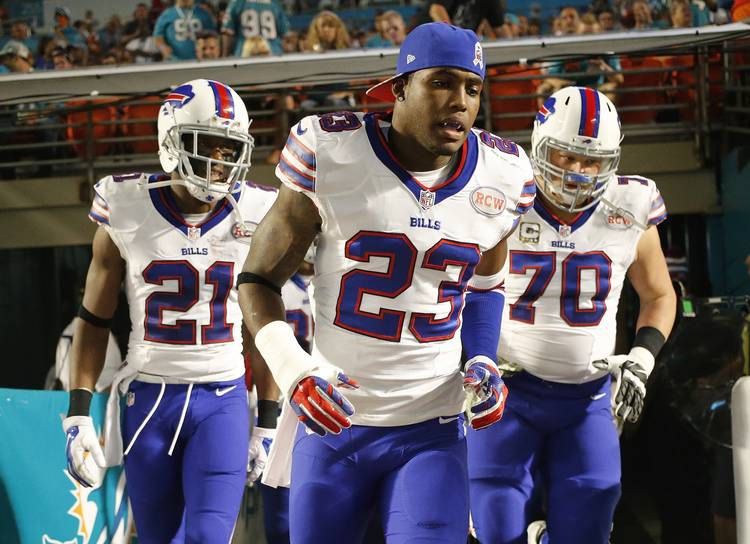 Aaron Williams (#23) leads teammates Leodis McKelvin #21 and Eric Wood #70 of the Buffalo Bills onto the field before they met the Miami Dolphins in a game at Sun Life Stadium on November 13, 2014 in Miami Gardens, Fla. Williams announced his retirement from the NFL on Wednesday. (Photo by Joel Auerbach/Getty Images)

Aaron Williams, who once starred locally at Texas and McNeil High, announced his retirement from the NFL on Wednesday.

In a lengthy story published on the Players’ Tribune, Williams discussed his decision to step away from football. He also wrote about his relationship with fans of the Buffalo Bills and his series of serious injuries. Williams added that he does not know what his post-career plans are yet.

Williams was a second-round pick by the Bills in 2011, and the strong safety spent his six-year career in Buffalo. He compiled 257 tackles and seven interceptions in 59 games with the Bills. Williams, who began his professional career as a cornerback, recorded 84 tackles, four interceptions and 11 pass deflections in 2013.

Williams missed much of the 2016 season with a concussion, and he was cut prior to the 2017 campaign. Williams said he drew interest from the Jaguars, Texans and Chiefs after he left Buffalo, but those teams were reluctant to sign him because of his injury history.

Williams played at Texas from 2008-10, and his 81-yard interception return against Arkansas in 2008 is the eighth-longest in UT history. Williams was one of four Longhorns taken in the 2011 NFL draft. His retirement leaves Chicago linebacker Sam Acho as the only active member of that quartet.

Before he became a Longhorn, Williams earned Army All-American honors while playing at McNeil High.