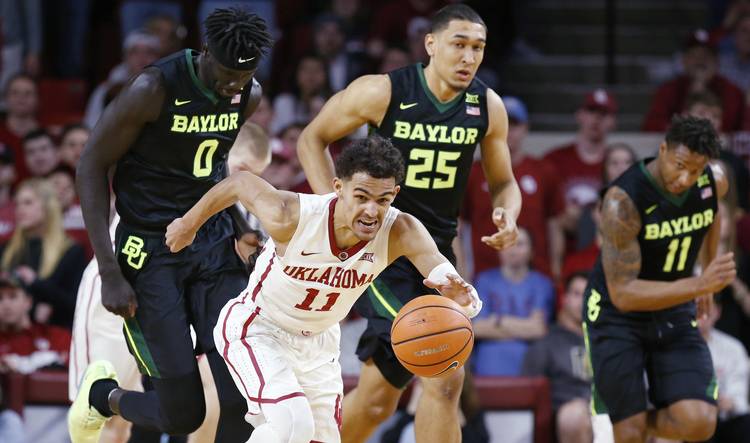 Oklahoma guard Trae Young (11) heads up the court with a steal in front of Baylor forwards Jo Lual-Acuil Jr. (0), Tristan Clark (25) and Mark Vital (11) during the second half of an NCAA college basketball game in Norman, Okla., Tuesday, Jan. 30, 2018. (AP Photo/Sue Ogrocki)

About the series: Oklahoma leads the all-time series 54-37. The Sooners have dominated the series of late, winning six of the last eight. That follows a long run of Texas domination on the hardwood that lasted throughout the previous decade. The basketball version of the Red River Rivalry dates back to February 1910.

About the Longhorns: Keep an eye on Mo Bamba’s mobility. He suffered a left knee injury against Texas Tech when it appeared a teammate rolled up his leg. Bamba returned to the game, but he was playing through clear pain. “Yeah, I was going back in regardless,” Bamba said. “My leg could have been in two pieces and I would have stayed in.” … Dylan Osetkowski  also said his right ankle felt “terrific” on Thursday. He also removed the braids. As for how he’ll style it on Saturday, “I’m going to let that be more of a visual experience,” Osetkowski said. … Former UT football coach Mack Brown will be honored at halftime for his upcoming induction in the College Football Hall of Fame. … The game is sold out.

About the Sooners: Dynamite freshman Trae Young gets all the attention, but he also leads the nation in assists per game. That means other players are scoring, too. Brady Manek, Khadeem Lattin and Christian James are all shooting better than 58 percent. The Sooners also have the best 3-point shooting percentage (.421) in the Big 12. … Defensive standout Rashard Odomes was not known for his scoring early on. However, he’s averaging 10.4 points in the last 10 games. … James missed Tuesday’s 98-96 win over Baylor with the flu. Jamuni McNeace played limited minutes because of an ankle injury. … After Texas lost Wednesday against Texas Tech due to free throws, it’s worth noting that OU comes in with the most free throw attempts in the Big 12 this season. They’re third in free-throw percentage (.749).

This week in NFL mock drafts: Could Malik Jefferson head to Dallas in a first round that omits Connor Williams?