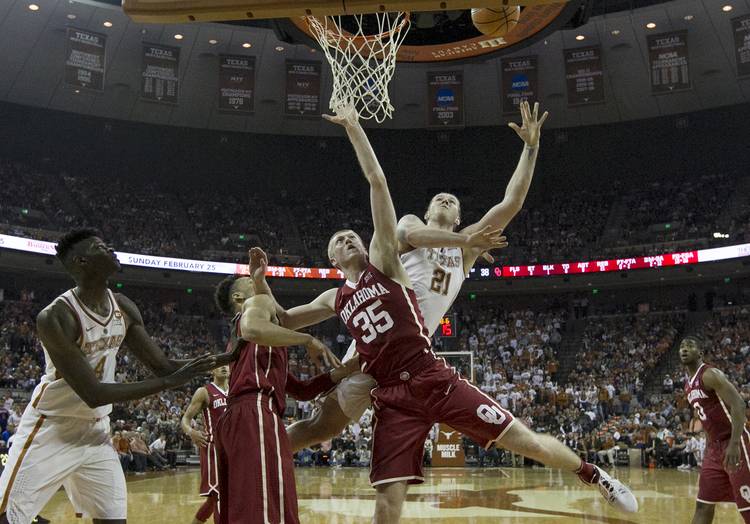 From his hospital bed in Houston, Andrew Jones unleashed a simple tweet Saturday afternoon with a universal message.

The Longhorns did exactly that. They made their free throws. They played suffocating second-half defense. And just when the Erwin Center was ready to blow, Mo Bamba threw down a vicious dunk as a highlight capper to a 79-74 victory.

Oklahoma took a 66-57 lead on Trae Young’s sly alley-oop pass to Jamuni McNeace. But Texas came roaring back. Kerwin Roach II drilled a 3-pointer at the top of the key. The Horns got in the bonus with more than six minutes remaining, and unlike earlier in the week, they started hitting free throws. Roach and Dylan Osetkowski went 4 for 4 on back-to-back possessions. Roach hit two more, then Matt Coleman hit two himself with 50.9 seconds left.

Coleman scored on a driving layup, and Roach’s bucket capped a 13-0 run that had the sold-out crowd going bonkers. Texas suddenly had a 70-66 lead and all the momentum.

Young wasn’t done yet, though. He threw more alley-oop passes, one to Christian James and another to Brady Manek. But the Horns answered with more free throws and a wild reverse dunk by Bamba with 33 seconds left.

In a battle of point guards, both had shining moments. OU’s Young dished out nine assists in the first half and finished with 14 total. He was every bit as dazzling as expected en route to 19 points.

But Coleman also had a nice bounce-back performance after a rough game against Tech. He dribbled between his legs, shook his defender and drilled a 3-pointer that made it a four-point game. He then missed a dunk but answered with a 19-footer from the right corner.

Coleman finished with a game-high 22 points on 8 of 13 shooting and only four turnovers while playing a complete 40 minutes.

The entire day appeared to be directed at one person: Jones. The Texas guard was diagnosed with leukemia and is currently undergoing treatment at the UT MD Anderson Cancer Center in Houston.

A source close to the family said Jones did watch ESPN’s “College GameDay,” which had a heart-breaking feature on the story. Former Texas coach Mack Brown was also honored at halftime for his induction into the College Football Hall of Fame. He pulled off his UT shirt to reveal an AJ1 shirt.

“We’re praying for him,” Brown told the crowd. “We’re pulling for him to have a full and speedy recovery.”

Jones posted his first tweet since the diagnosis at halftime.

I would like to thank everyone for all the support and love. I’m doing a lot better and still fighting. #hookem #boom

It’s unclear whether Bamba was awake defensively midway through the first half as McNeace was having his way inside. McNeace scored on a dunk, then scored over Bamba and then on another layup giving OU a 24-17 lead.

McNeace was a menace, so much so that Osetkowski drew a flagarant-1 foul with 6:40 remaining. ESPN announcers didn’t think it was a legitimate call, and McNeace missed both free throws.

It’s somewhat of a miracle that Texas was down only five points at halftime. The Sooners had a 22-15 edge on the glass and outscored the Longhorns 11-6 in second-chance points. Offensively, Texas had some rather puzzling possessions. You simply didn’t know what the goal was at times. Texas was 2 for 12 from 3-point range in the first half. A late flurry by OU — two layups by Rashard Odomes — gave the visitors some cushion.

The only team Texas has not faced in Big 12 play is Kansas State. The Wildcats come to Austin on Wednesday for a game that begins at 7 p.m. Coach Bruce Weber’s team had the misfortune of running into an angry West Virginia team on Saturday. The 15th-ranked Mountaineers stormed to a 89-51 win.