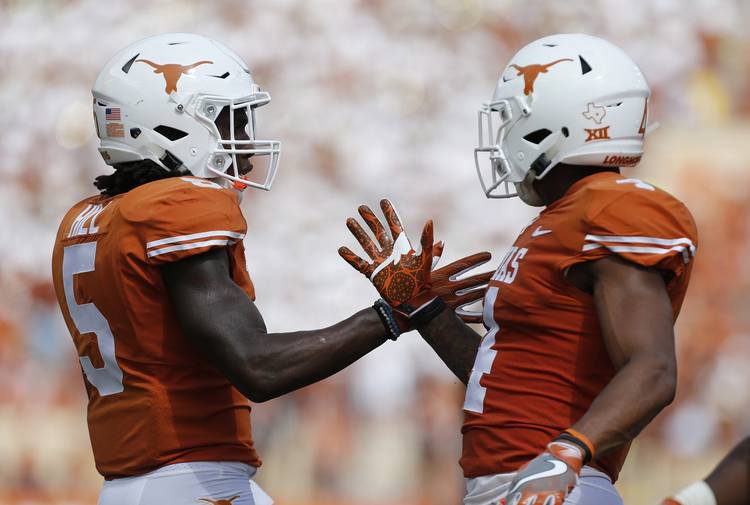 Texas defensive backs Holton Hill (5) and DeShon Elliott celebrate during a game against Oklahoma State on Oct. 21, 2017. Hill and Elliott will participate in the 2018 NFL Combine. (Stephen Spillman / for American-Statesman)

On their journeys to the NFL, six Texas Longhorns must make a stop in Indianapolis.

It was confirmed on Tuesday that offensive lineman Connor Williams and linebacker Malik Jefferson have accepted invitations to the 2018 NFL Combine. Williams and Jefferson, who has been slotted as first-round picks in some mock drafts, will be joined at the NFL Combine by Texas teammates Michael Dickson, DeShon Elliott, Holton Hill and Chris Warren III.

All six players were juniors at Texas this past season. Seniors like defensive tackle Poona Ford and receiver Armanti Foreman were not among the 326 players invited to the combine. (Texas’ pro day will be held on March 28).

The NFL Combine will be held at Lucas Oil Stadium from Feb. 27- March 5. Players who attend the combine will be subjected to a litany of physical and mental tests and interviews with representatives of NFL teams.

Williams will join 47 other offensive lineman at the combine while Jefferson is one of 45 linebackers. Elliott and Hill are two of the 40 defensive backs, and Warren will attempt to standout among 32 running backs. This past season’s Ray Guy Award winner, Dickson headlines a group of seven punters.

Alabama led all schools with 14 invitees to the NFL Combine.