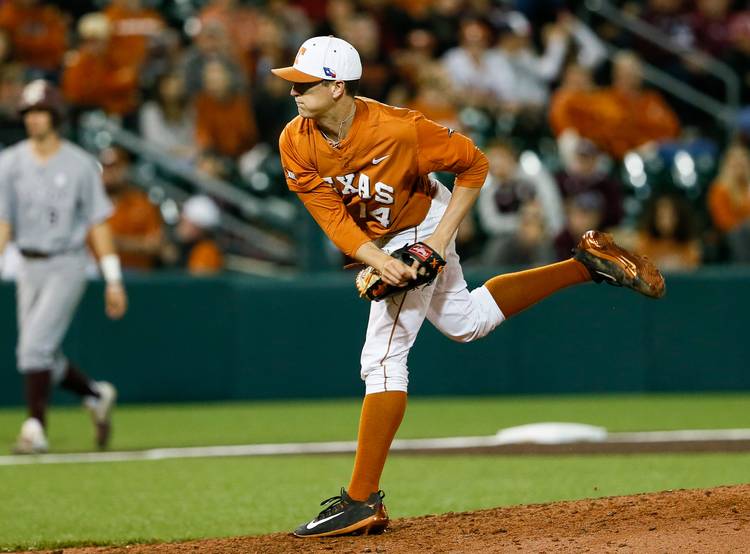 Texas reliever Beau Ridgeway (#14) takes the mound in the eighth inning of a win over Texas A&M at UFCU Disch-Falk Field on March 14, 2017 (Andy Nietupski for AMERICAN STATESMAN)

Over the past 13 baseball seasons, Texas has boasted the nation’s top reliever on three different occasions. Junior Beau Ridgeway will look to continue that tradition this spring.

Ridgeway has been placed on the watch list for the National Collegiate Baseball Writers Association’s Stopper of the Year award, which is given annually to the top reliever in college baseball. Ridgeway landed on the midseason watch list for last year’s award, which was won by Louisville’s Lincoln Henzman.

Ridgeway was one of 52 names on the watch list.

In 2017, Ridgeway went 2-2 with a 1.89 ERA. The right-hander from The Woodlands’ 12 saves ranked third in the Big 12 and 25th nationally. He also became the first Longhorn to record double-digit saves since Corey Knebel in 2011.

Knebel (2011), Chance Ruffin (2010) and J. Brent Cox (2005) are ex-Longhorns who have previously won the Stopper of the Year award. Cox was the inaugural recipient.

Texas opens its 2018 season with a home game against Louisiana-Lafayette on Feb. 16.