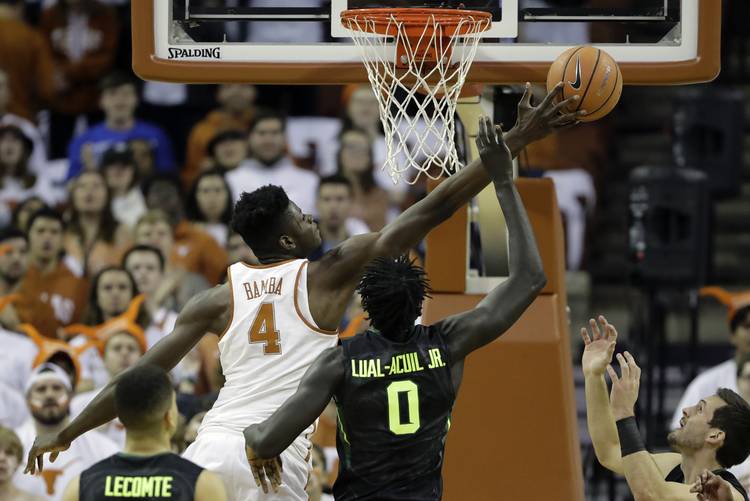 A season with promise and potential is spiraling out of control.

The Longhorns are now in free-fall after Monday’s 74-73 double-overtime loss at the Erwin Center. Baylor was the culprit this time, getting 26 points from Terry Maston — including 12 in the two extra frames — and Kerwin Roach II missed a final off-balance jumper just before time expired.

Both teams came in desperate and sported matching 15-10 records. Both were also 5-7 in Big 12 play. But the Bears who have the upper hand in the standings now as the Longhorns have lost three straight.

Baylor coach Scott Drew is now 6-1 over his Texas counterpart, Shaka Smart, who cards a 46-46 record in three seasons in Austin.

The Horns had a chance late. Mo Bamba blocked Maston’s shot attempt with 2:20 remaining in regulation, and then Maston drew a technical foul for shoving the big man. But Eric Davis Jr. missed both free throws. On the ensuing possession, Dylan Osetkowski made a tough jumper, and the Horns trailed by two.

Matt Coleman drilled a 3-pointer from the left corner and followed that with a scoop layup with 27 seconds left. Baylor still had a 55-54 lead. Coleman forced overtime with two free throws with 12.2 seconds left, but Maston gave the Bears the upper hand in the extra period.

In the first overtime, Maston got loose early and scored six points. But Texas came clawing back and tied things up with six consecutive free throws. In the second OT, Davis gave the Horns a 71-70 lead with a corner 3-pointer. And Roach added to that with an open drive to the basket.

Baylor’s Manu Lecomte missed a jumper with 6 seconds left, but Jo Lual-Acuil followed with a put-back dunk that made the difference.

Maston put on a show against Iowa State earlier this month with a season-high 23 points. He didn’t quite get there against Texas but his buckets were vital — and impressive, too. He took over early in the second half, scoring on a baseline turnaround jumper, another inside the lane and a mid-range fadeaway. That last bucket gave Baylor a 37-29 lead. His crazy jumper with 4:18 remaining made it an eight-point game as some UT fans headed to the exits.

Smart has tried for several weeks to get Osetkowski to just relax, let go and play care-free basketball. The junior did that against Baylor, although his stat line may not reflect it. Osetkowski was more active that he’s been in recent games and tallied up 15 points and six rebounds. He caught an alley-oop pass from Roach and slammed it home with 8:13 remaining to make it a two-point game.

Texas didn’t score a single point in the last 5:03 when the two teams met in Waco on Jan. 6. That scoreless string continued early on Monday. Osetkowski’s layup with 17:02 left in the first half stopped the skid. But Texas didn’t get another field goal until Matt Coleman’s forced jumper fell true with 10:29 remaining. In a critical game, the Horns opened the night 2 of 14 shooting.

The first half was a tale of two runs. The Longhorns fell behind 15-6 early. But Eric Davis Jr. hit a 3-pointer from the right corner, and the Horns were off and running. Roach stole a pass near mid-court and ran the other way for a dunk. Matt Coleman threw a high pass for Bamba, who slammed it home with all of his 7-foot-9 wingspan. The Horns went on a 12-0 run and took a three-point lead.

But Baylor came storming back with its own flurry. Maston hit a 17-footer, and Jake Lindsey drilled a 3-pointer. Lecomte followed with his own 3-pointer, and Maston scored again on a tough inside bucket. Baylor’s 10-2 run gave the Bears a 25-20 lead.

Three of UT’s next four games are on the road, a stretch that will either solidify this team’s NCAA hopes or bury them. First comes Saturday’s trip to Oklahoma. It’s an 11 a.m. tipoff at the Lloyd Noble Center. The Sooners haven’t been able to escape their recent funk. They’ve lost four of the last five games, including a 79-74 decision to Texas in Austin.