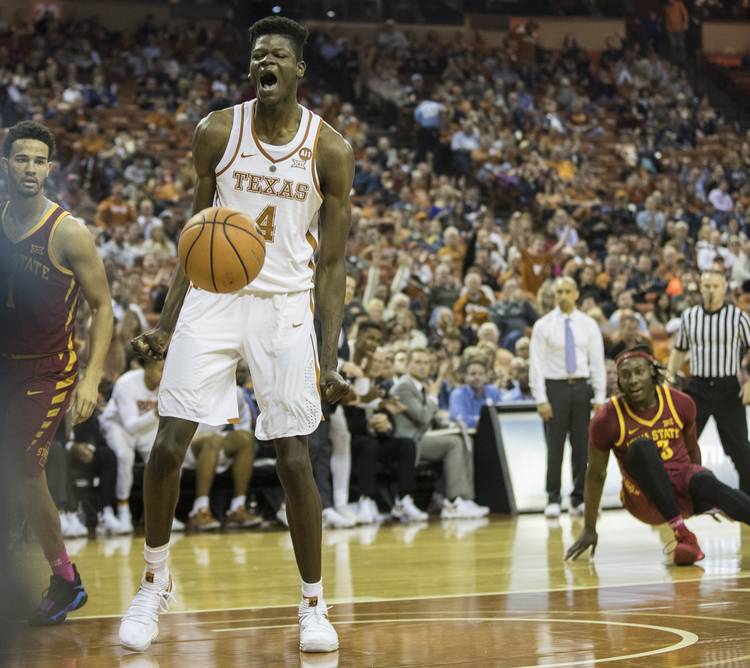 Sports Illustrated updated its NBA Mock Draft projections on Monday and while the Longhorns enter the week in dire need of wins, that hasn’t taken any excitement away from freshman sensation Mo Bamba.

According to the magazine and writer Jeremy Woo, Bamba is a future Phoenix Sun, taken with the third pick.

What’s fascinating about this mock draft is that in an era where guards and “wing” players seem to be put at the highest of importance in the NBA, three of Woo’s top four picks in the mock draft are post players: Arizona freshman Deandre Ayton, Bamba and Duke freshman Marvin Bagley. Bamba rose from four to three since Sports Illustrated last updated the mock draft.

If Bamba was selected No. 3, he would join Durant, Aldridge, Thompson and LaSalle Thompson (5th overall pick in 1982) as top five draft picks.

Jay Arnette was taken No. 9 in the 1960 NBA Draft by the Cincinnati Royals.

Bamba would join a young Suns team that has been struggling ever since parting with two-time NBA MVP Steve Nash several years ago. With standouts like Devin Booker and 2017 top five pick Josh Jackson, Bamba may be a nice fit in the desert.

Here’s what Woo says: “There’s no question that Bamba has insane defensive potential with his length and mobility, and he’d be an ideal complement to a scoring-minded core group headlined by Devin Booker.”

Bamba is no stranger to big expectations. He was one of top recruits in the nation before selecting Texas as his school late in the recruiting process last year. The New York native has excelled in the last six games for Texas, averaging more than 19 points and 10 rebounds for the Longhorns.

Woo says Bamba’s ability to lead the Longhorns to the NCAA Tournament could throw cold water on the major criticism scouts are heaping on the 7-footer: his desire to compete and play hard. This is probably exactly what Longhorn fans want to hear as Texas enters a cross roads of sorts after losing back-to-back games.

If Bamba is drafted in the lottery, he could be on a path to an NBA Championship. Durant (Golden State), Thompson (Cleveland) and Mihm (Los Angeles Lakers) have all been on NBA Championship teams.

Other first round picks?

Texas remains No. 6 as UConn remains unanimous No. 1 in AP basketball poll