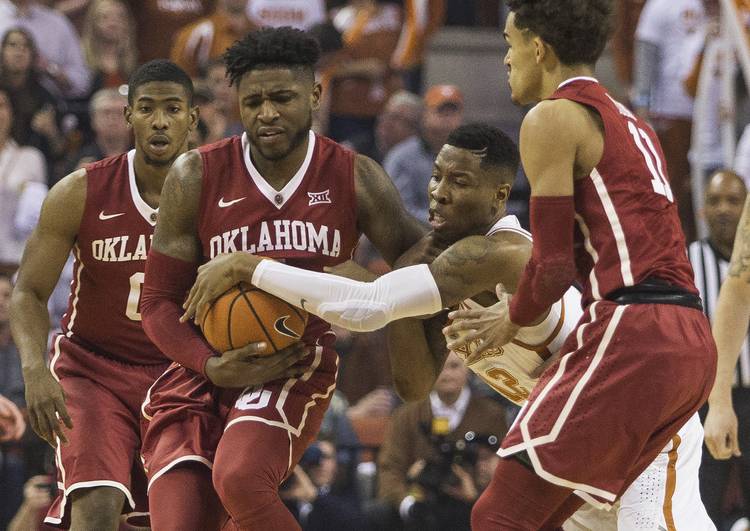 Texas at No. 23 Oklahoma

About the series: Oklahoma leads 54-38. The Longhorns won the previous matchup on Feb. 3 on what became a huge day for the entire basketball program. ESPN’s “College GameDay” was on hand as Matt Coleman rang up 22 points and guided Texas to a 79-74 victory. OU’s Trae Young missed 12 of 14 shots from 3-point range.

About the Longhorns: Freshman Mo Bamba continues to earn national praise for his season. He was recently named to the Naismith Trophy Late Season top 30 players who are under consideration for the national award. He has a Big 12-best 13 double-doubles, including eight in league play. Ten semifinalists will be named on Feb. 28. … Dylan Osetkowski needs to rebound in the closing weeks. He’s averaged just 9 points and 5.7 rebounds in the last three games. … The university is not selling any AJ1 shirts online. NCAA rules prohibit schools from selling merchandise that promotes an individual athlete, in this case Andrew Jones. Any shirts available online are not licensed by UT, and no proceeds will go toward Jones’ family.

About the Sooners: Coach Lon Kruger’s club simply hasn’t been the same since losing in Austin earlier this month. Oklahoma has now lost four straight, a stunning fall even with Young, still the nation’s leading scorer. OU lost to West Virginia, Iowa State and Texas Tech. … Young was 0 for 9 from 3-point range in Tuesday’s loss in Lubbock. Prior to that, he had made at least one 3-pointer in every game this season. … Christian James has put together two solid performances. He had 22 points against Iowa State and 23 against Tech. In those two games, he was 16 for 30 from the floor. … Jamuni McNeace’s season high is still the 16 points he scored against Texas. He’s averaged 7.7 in the last three games.

This week in mock drafts: Will Connor Williams and Malik Jefferson still be teammates in 2018?