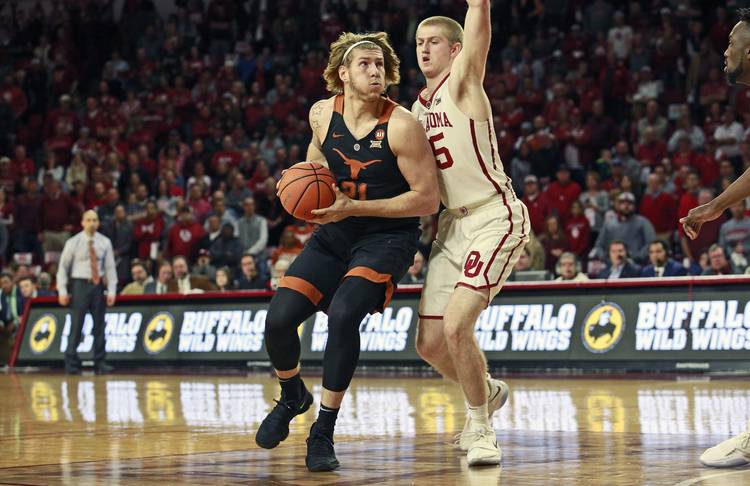 Dylan Osetkowski of Texas drives on Brady Manek of Oklahoma during the Longhorns' victory Saturday. (Photo by Brett Deering/Getty Images)

NORMAN, Okla. — In a battle of two desperate teams, the Longhorns stabilized themselves at the Sooners’ expense.

Texas captured a much-needed 77-66 victory over its Red River rival on Saturday at the Lloyd Noble Center. It stopped the Longhorns’ three-game losing streak and bolstered their NCAA Tournament hopes with only four regular-season games left.

It was also UT’s first win in Norman since the 2011-12 season. The Sooners had won five straight home games in the series.

Some prognosticators believe this is a year where a Big 12 team with a 7-11 league record could get into the NCAAs considering the league is so difficult. Texas (16-11, 6-8 Big 12) is inching closer while 23rd-ranked Oklahoma (16-10, 6-8) is going the other way. The Sooners have now lost five straight.

Dylan Osetkowski came alive in the second half and finished with 21 points. He was calm and collected as the Sooners tried to press in the closing minutes. He got a rim-rattling dunk with 5:07 left, and then Eric Davis Jr. and Matt Coleman followed with buckets that appeared to zap OU’s energy.

Coleman also drove right down Broadway for a reverse layup with two minutes left that practically ended it. Some OU fans, including Heisman Trophy winner Baker Mayfield, started heading for the exits as Texas led by 12.

He doesn’t play all that much, but Jacob Young was exactly the spark Texas needed. Twice, he made steals in the open floor and went the other way for dunks. Smart has been leaning on someone to make plays. Young did exactly that. He scored twice during a 12-0 run that gave the Longhorns a 13-point lead with 8:48 remaining.

Kerwin Roach II came ready to play. However, he tripped Young early and had to sub out for an ankle issue. Roach eventually came back and went to work. He threw down a dunk and then almost went vertical chasing a loose ball, getting fouled in the process. Roach finished with 12 points and three assists.

Coach Shaka Smart was visibly upset in the first half when Osetkowski passed up an open 3-pointer. In Smart’s mind, that alone deserves a Horns Down, because he believes in Osetkowski’s 3-point shot even if the junior questions himself at times. The big man must’ve gotten the message. Osetkowski came out gunning in the second half, hitting two treys and getting a big block that led to a Jacob Young layup in transition.

Once again, ESPN was going gaga over Young, but the talented freshman wasn’t giving Dick Vitale much to rave about. Young started the game 0 for 5 shooting. After missing a 3-pointer with less than four minutes remaining in the first half, Young had slumped shoulders while walking to the bench. His first 3-pointer came with 13:12 remaining in the game.

Texas now heads to the “Octagon of Doom” at Kansas State on Wednesday. It’s a big chance for UT to wash away the 67-64 loss in Austin from Feb. 7. That was far and away UT’s most lackluster performance of the season.