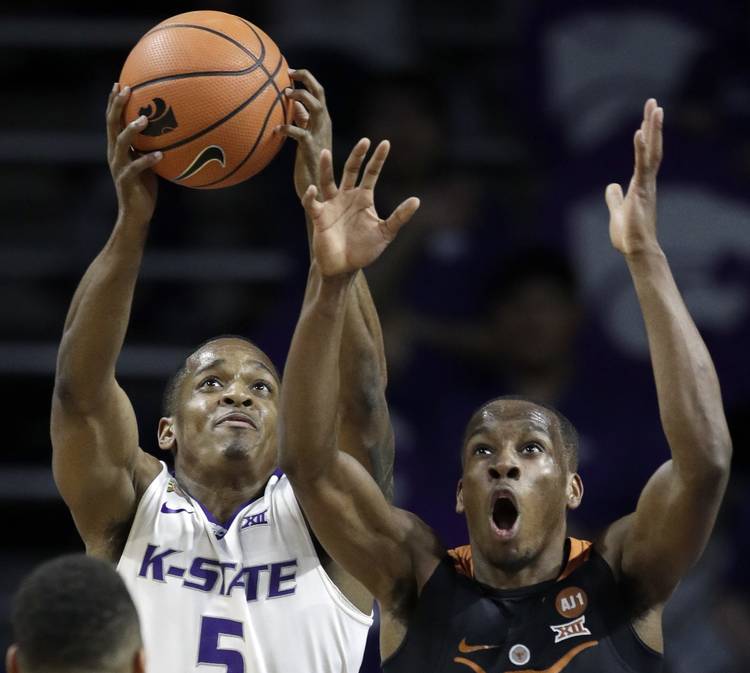 MANHATTAN, Kan. — In a pivotal moment in one game at a crossroads junction in the season, Texas coach Shaka Smart went with his five best players against Kansas State.

But three juniors and talented freshmen Mo Bamba and Matt Coleman simply couldn’t muster enough offense down the stretch. K-State emerged with a 58-48 victory at Bramlage Coliseum that pushes UT back toward the wrong end of the NCAA Tournament bubble.

The Longhorns (16-12, 6-9 Big 12) badly needed this win considering their rugged closing stretch to the regular season. But Kerwin Roach II fouled out with 3:08 remaining. Xavier Sneed hit two free throws to give K-State a five-point lead.

Then, the Wildcats went up by seven as Barry Brown Jr. scored on a running layup. UT’s Eric Davis Jr. got blocked on his shot attempt as the Horns were 1 for 9 shooting down the stretch.

Brown’s two free throws with 1:53 remaining practically sealed it for Kansas State (20-8, 9-6). The Horns got four shot attempts on a single possession in the final minute. None of them went in. It was a fitting end to a night where Texas shot 28.6 percent, the second-lowest total ever produced in coach Shaka Smart’s three seasons.

Matt Coleman’s come a long way since Lubbock. He missed three consecutive free throws at a critical moment in an overtime loss to Texas Tech. But he’s pretty steady ever since. Coleman hit six straight free throws to give the Horns a 44-42 lead against the Wildcats with 5:18 remaining. Every one was necessary in a tight game prone to long stretches of bad offensive basketball. He finished with 12 points.

One of the best updates of the week came from Andrew Jones. The Texas guard is currently undergoing treatment for leukemia in Houston. But he called into the Lonestar Sports Network and gave an update on his condition. “I would just like to thank everybody for their support and love and caring for me while I go through this situation,” Jones said.

No team can ill afford a bad scoreless drought on the road. Texas opened the second half with a layup from Dylan Osetkowski. But then the Longhorns missed their next 10 shots. Roach had an off-balance jumper. Coleman’s shot attempt got blocked into the stands. Eric Davis Jr. and Jase Febres both missed left corner 3-pointers. The Wildcats inched ahead for a 33-28 lead, a margin that felt huge considering the low-scoring nature of the night.

The Wildcats didn’t do themselves any favors in the first half by missing 12 consecutive shots. Some of them were contested by Bamba’s 7-foot-9 wingspan; others the Wildcats just flat-out missed. But the Horns could only build up a 16-11 lead. Roach threw down a vicious one-handed dunk, Jericho Sims scored on a layup and Osetkowski hit a runner.

Unfortunately, Texas would get only three more field goals in the final eight minutes before halftime. Roach got fouled on the final play of the half, and he made two of three free throws to tie things up 25-25.

Just when it looked like Texas would have an easy day this weekend against Oklahoma State, the Cowboys jump up and shock Texas Tech on Wednesday. Coach Mike Boynton’s club is now 6-9 in league play after a 79-71 win over the sixth-ranked Red Raiders. OSU has already dispatched Texas in Stillwater with a 65-64 win. The Longhorns can’t let Saturday’s rematch slip away.