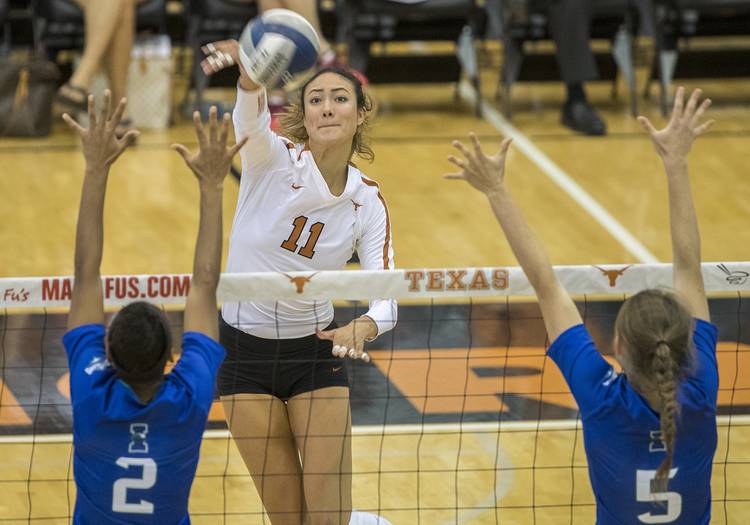 A 6-2 outside hitter, Sun spent just one season with the Longhorns. She will have three years of eligibility remaining.

“I want to thank all of the people that have impacted me throughout my time here at The University of Texas, Sun said in a statement released by Texas. “I know the Longhorn volleyball program will continue to be successful and I wish them nothing but the best.”

Recruited out of California, Sun arrived at Texas this past summer as the country’s top-rated recruit. She opened her collegiate career with an 11-kill performance, and her 3.27 kills per set were second to only Micaya White (3.4) on the team. Sun was a first-team honoree on the all-Big 12 team and a three-time winner of the conference’s freshman of the week award.

Sun did not record double-digit kills during any of Texas’ four matches in the NCAA tournament. She was benched during UT’s third-round comeback win over Utah.

“This is about Lexi and her family,” UT coach Jerritt Elliott said in a statement.  “We think she is a wonderful young lady. We have a lot of respect for her and wish her the best of luck.”

Sun’s departure will force Texas to make another edit to its roster. The Longhorns already had to replace All-Americans Chiaka Ogbobu and Ebony Nwanebu as well as fellow departed senior Cat McCoy, the school’s career leader in digs. Liberos Olivia Zelon and Natalie Gilbert also left the program this offseason.

Without Sun, White and Yaazie Bedart-Ghani are the only pin hitters on Texas’ roster.

UT will host Texas A&M in a spring scrimmage on April 4.

This week in mock drafts: Is Holton Hill the Longhorns’ top defensive prospect?