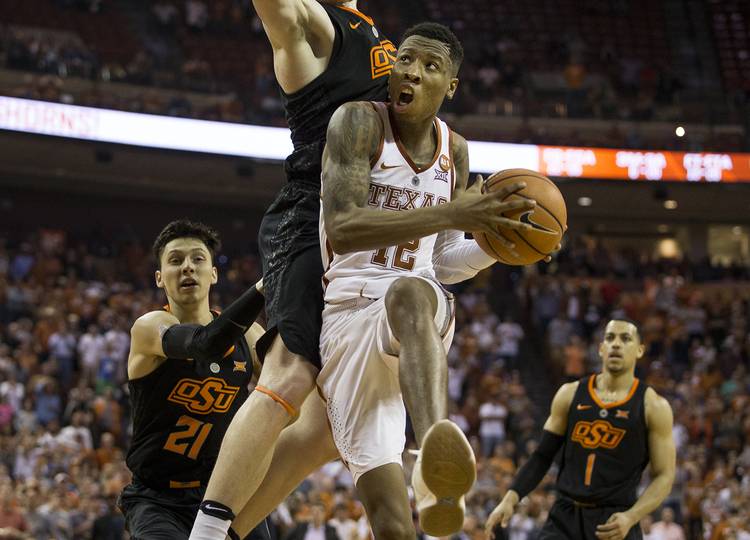 Eric Davis Jr. was held out, and Mo Bamba was held up. But Texas would not be stopped Saturday in a must-win game against Oklahoma State at the Erwin Center.

Trailing by 10 points and without two key contributors, the Longhorns appeared to be on razor-thin ice. But Matt Coleman hit a short jumper to give UT the lead, and Jacob Young followed with a corner 3-pointer with 2:40 remaining.

The Horns erased the double-digit deficit by using an extended zone. But they went back to man-to-man in the final minute. Oklahoma State’s Kendall Smith backed Coleman down and hit a mid-lane jumper with 22 seconds left.

After a Texas timeout, Kerwin Roach II got the ball at mid-court and dribbled. Dribbled and dribbled some more. Dribbled even more. Then in the closing seconds, he went down the left side of the lane and got a scoop layup to fall true. That was enough with 1 second left.

With a fan base shouting at full throttle, Texas captured a 65-64 win that kept the team’s faint NCAA Tournament hopes alive. The Longhorns (17-12, 7-9 Big 12) still have two regular-season games left, including one more at home. Most observers believe that eight league wins is good enough to get into the NCAAs this year.

The Horns did it despite being short-handed. School officials decided to sit Davis after his name surfaced in a Yahoo Sports report on Friday in connection with the FBI’s investigation into college basketball. It’s unclear whether Davis will return this season. Bamba struggled through the first half with the same left toe injury that dogged him against Kansas State. He sat out the entire second half.

In a game where UT needed firepower, Roach and Dylan Osetkowski came up big for the Horns. Both finished in double figures, and both led the charged as Texas erased a 10-point second-half deficit. Roach got two free throws and then scored on a driving layup to make it a four-point game. Later, his 14-footer tied things up with 6:56 remaining. Roach finished with 12 points, none bigger than the final two. Osetkowski had 13 points and nine rebounds.

Bamba’s absence in the second half paved the way for Jericho Sims and James Banks III. Both players were active in their most important roles of the season. Sims had 11 points and seven rebounds. His turnaround off the block in the final minute gave Texas a 63-62 lead.

Smart felt the pressure to beat Oklahoma State after Wednesday’s loss to Kansas State. “We’ve got to put everything we have into winning our next game,” he said. It had to be mind-boggling for Smart to watch his Longhorns start the game 0 for 8 shooting. Fans don’t sit down until UT scores its first basket. They had to wait almost five full minutes before Matt Coleman drilled a 3-pointer from the left corner.

Oklahoma State’s Jeffrey Carroll drilled a 3-pointer just before the halftime buzzer, and the Cowboys kept the pedal on the metal when play resumed. The Cowboys raced out to a double-digit lead thanks to a 20-2 run fueled by treys from Cameron McGriff and Lindy Waters III. That’s really where the game turned. Just like the first half, Texas started the second with eight straight missed shots.

From the fans’ standpoint, Allen Fieldhouse is one of the biggest bucket-list items in college athletics. Kansas fans fill the place up early, and the house is always rocking. It’s hell on opponents, though. Texas makes its annual pilgrimage to Lawrence on Monday for an 8 p.m. game against a Kansas team closing in on its 14th consecutive Big 12 title. UT has lost eight straight in the series.

Texas to light tower in honor of Big 12 swimming dominance