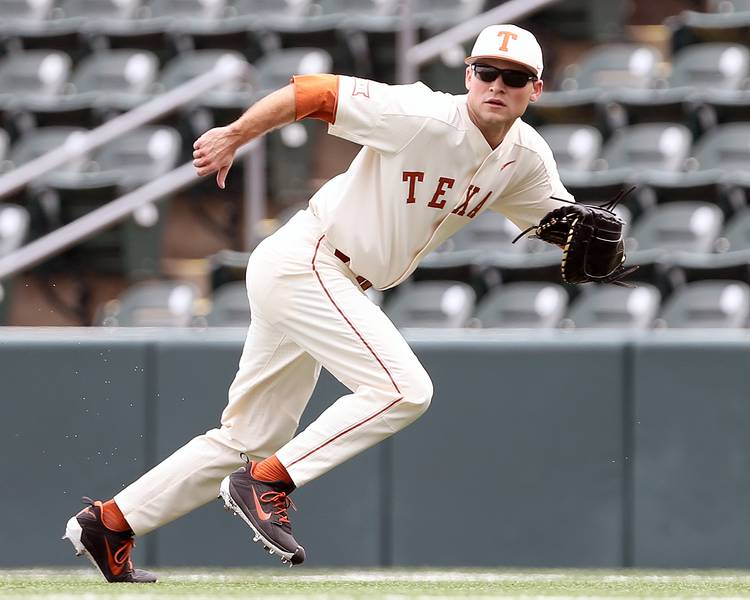 Texas first baseman Jake McKenzie makes a move toward the ball during a 12-1 win over Northwestern at UFCU Disch-Faulk Field on March 4, 2018. JAMIE HARMS / FOR AMERICAN-STATESMAN

With Arizona’s softball team and Northwestern’s baseball squad in town this past weekend, Texas wowed the Wildcats with their defense.

Texas’ defenses produced a handful of highlights over seven games against Arizona and Northwestern. (UT’s baseball team went 3-1 while the softball program beat No. 9 Arizona once). The Longhorns combined for only four errors in 55 innings of work.

Let’s take a look at a quartet of those defensive show-stoppers:

As he recovered from an arm injury at the beginning of this season, Fields was limited to pinch-running, one at-bat and an inning in the outfield. The freshman, though, made a splash in his first start. Fields ended the fifth inning of Saturday night’s 16-3 win over Northwestern with a diving catch in center field.

The catch was the first career put-out for Fields. In addition to contributing in the outfield, Fields may also pitch for Texas this season.

Hayter ran down a foul ball in right field on Sunday, and the junior made a catch while plowing through a closed gate at McCombs Field. Umpires ruled that Hayter did not make the catch before she left the field of play, so the out did not count. (Arizona’s Jessie Harper later grounded out to third base).

Hayter’s non-catch, though, was the No. 10 play on SportsCenter’s daily rundown of the nation’s top highlights.

Hayter began her collegiate career at North Texas, and she won a NJCAA at Butler Community College last year. The speed she showcased in the outfield on Sunday has led to a team-high four steals this season.

One out before Fields showcased his dandy defense, Hibbeler ranged to his right at shortstop and retired Northwestern catcher Mat Jones with an impressive throw to first base. A transfer from Odessa College, Hibbeler began this year as Texas’ second baseman. After UT shuffled its defensive line-up, however, Hibbeler moved to left field.

Hibbeler is also shortstop David Hamilton’s back-up, and Texas coach David Pierce said “he’s got plenty of speed and arm strength to play in the outfield. He can play second and short.” After starting on Saturday night in left field, Hibbeler played four innings at shortstop. He moved over to third base for the final inning of UT’s rout.

Hand-eye coordination? That's something @JakeMcK13 has a lot of. pic.twitter.com/JUcZT7Oo6R

The lone senior on the roster, McKenzie helped Texas turn its ninth double play of the season. McKenzie knocked down a sharply-hit one-hopper at third base on Saturday night, and he recovered in enough time to get the baseball to second base. Joe Baker then completed the baseball’s seventh-inning trip around the infield.

During Texas’ 16-3 blowout of Northwestern, McKenzie started at first base. He moved to third base in the sixth inning, and he later convinced Pierce to let him appear at shortstop during the final frame. McKenzie, who had been sidelined by a shoulder injury, was also available to pitch in the four-game series against Northwestern.