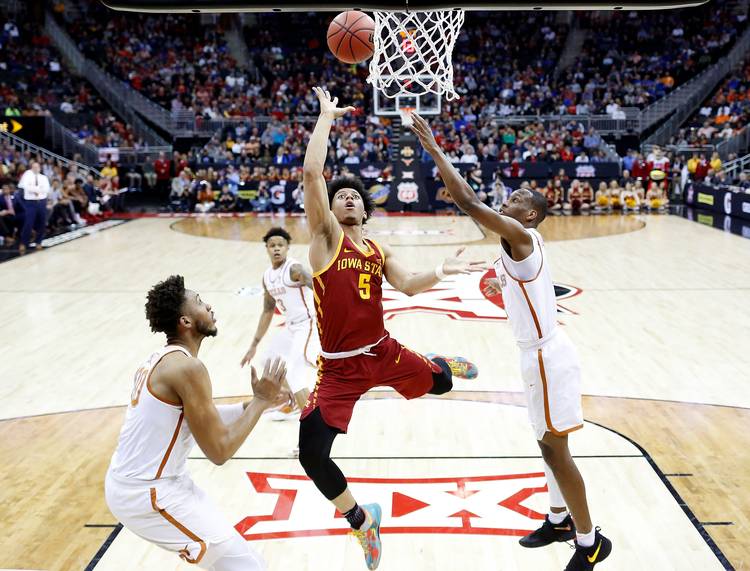 KANSAS CITY, Mo. — Texas, the worst 3-point shooting team in the Big 12, tried to shoot its own way out of the NCAA Tournament.

Dylan Osetkowski opened the game Wednesday with a barrage of missed 3-pointers and his teammates took turns missing from long range in one of the worst shooting displays in coach Shaka Smart’s three seasons.

Still, Texas made enough defensive plays — and two-point baskets — down the stretch to capture a 68-64 victory over 10th-seeded Iowa State at the Big 12 tournament.

With the win, the Longhorns (19-13, 8-10 Big 12) most likely locked up a spot in the NCAA Tournament, if bracket pundits are to be believed. Players could breath a huge sigh of relief despite hitting only eight of 31 shots from long range (25.8 percent).

Osetkowski’s layup and Jericho Sims’ dunk with 3:42 remaining gave seventh-seeded Texas some breathing room. But a six-point lead didn’t feel like much at Sprint Center, the home of thousands of Iowa State fans.

Matt Coleman’s 17-foot jumper with 44 seconds left gave Texas a 68-64 lead. Then, a pass to Iowa State’s Cameron Lard literally bounced off his face and went out of bounds with 29.2 remaining.

Osetkowski finished with a team-high 20 points and Jase Febres had 12 points. No other UT player was in double figures.

Osetkowski was going to win or lose this thing for Texas from the get-go. With Mo Bamba sidelined with a sprained toe, Osetkowski took it upon himself to let it loose. He had an awful start, strong finish to the second half, mediocre moments after the break and some big buckets late. His 3-pointer and reverse layup with 4:19 remaining gave Texas a 62-58 lead. A majority of his 20 points came during UT’s 22-3 run that bridged the two halves.

Somehow, Roach took an inadvertent elbow to the face midway through the first half and his tooth was “essentially cut in half.” After some attention from the trainer, Roach checked back into the game. The tooth was somehow put back in place at halftime, and Roach wore a mouthpiece in the second half. Bill Busch, the official dentist of the Kansas City Chiefs, did quick work at halftime, apparently.

This had to be the most horrific starts the Longhorns have had all season. The worst 3-point shooting team in the Big 12 tried to initiate a shootout. Only Texas started the game 0-for-9 from long range. That included four misses from Osetkowski. Five early turnovers didn’t help.

Strange as it sounds, the Horns were still in it. Roach’s 3-pointer with 11:01 remaining in the first half stopped the skid. Then Jacob Young buried another and Texas had a 15-14 lead.

If you were yelling at the TV screen back in Austin whenever Osetkowski fired it up, you were not alone. He started the game 0-for-4 from 3-point range. Finally, Osetkowski went inside and posted up, getting far better looks. He closed the first half scoring 10 straight points for Texas, including two 3-pointers that led to a 34-31 halftime lead.

Osetkowski’s finally tally in the first half was 5-for-12 shooting and 2-for-8 from downtown. Those numbers skewed UT’s first-half totals. The Horns ended up shooting 38.9 percent in the first half. But the Cyclones turned it over 11 times and missed some critical shots inside, too. Texas also had a 20-16 rebounding edge at the break.

Texas moves on to face No. 2 seed Texas Tech at 6 p.m. Thursday at Sprint Center. The Red Raiders and Longhorns split the regular-season series. Tech standout Keenan Evans is also suffering from a toe injury suffered in late February. He has been held out of almost all practice activity, saving his energy for the games.

Texas will now head home and await its fate from the NCAA Tournament selection committee. ESPN’s “Bracketology” analyst, Joe Lunardi, said the Horns would likely be out of the field of 68 with a loss to the Cyclones. But who knows at this point? In recent days, Texas had been projected as one of the last four teams in and playing in Dayton, Ohio, as part of the NCAA play-in game.