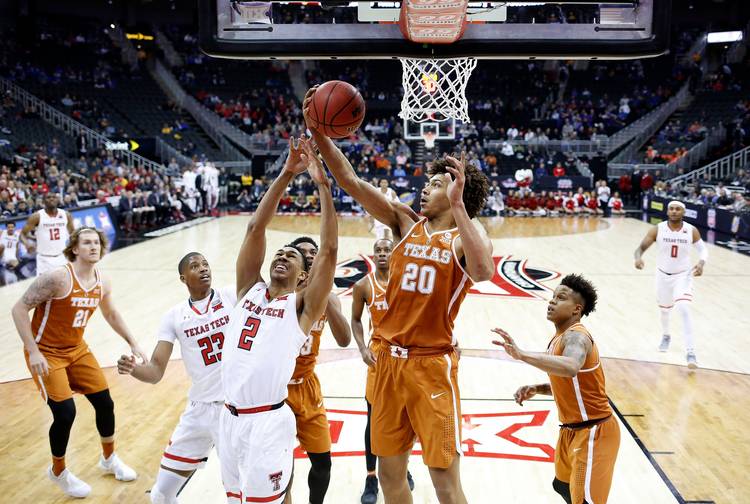 Jericho Sims #20 of the Texas Longhorns and Zhaire Smith #2 of the Texas Tech Red Raiders battle for a rebound during the Big 12 Basketball Tournament quarterfinal game at the Sprint Center on March 8, 2018 in Kansas City, Missouri. (Photo by Jamie Squire/Getty Images)

KANSAS CITY, Mo. — If you had Jacob Young in your who-saves-Texas’-postseason-bacon pool, you came awfully close to being a big winner.

The Texas sophomore played out of his mind, piling up a career-high 29 points in what was easily his best game as a Longhorn. It was the most points any UT player has amassed all season.

But Young didn’t get enough from others as second-seeded Texas Tech pulled away in the final minutes for a 73-69 victory in the Big 12 tournament quarterfinals.

Young was all over Sprint Center, going 6-for-7 from 3-point range. Matt Coleman added 20 more, including a perfect 10-for-10 at the free-throw line. That more than atoned for his three missed free throws that cost the Horns in Lubbock.

Still, it simply wasn’t enough. Tech’s Keenan Evans hit a critical 18-footer with 2:01 remaining and then drilled two free throws to give the Red Raiders (24-8) a seven-point cushion.

Three Texas starters offered little to no offensive help at all. Kerwin Roach II had just four points on 2-of-7 shooting. Dylan Osetkowski had four points on 2-of-8 shooting, and Jericho Sims had only one basket in 30 minutes. Texas shot 43.1 percent overall and went 7-for-18 from 3-point range.

Young has enough confidence to run through a brick wall. It might be the wrong wall. Heck, it might even be in the wrong building. But his confidence will never waiver. Prior to Thursday night, his career high was 14 points, most recently matched against Kansas at the end of the regular season. Young was having an out-of-body experience against the Red Raiders, scoring virtually at will and from everywhere.

Young’s biggest play of the night was a 3-pointer from the left wing with 11:53 remaining where he also drew a foul. Young hit the free throw for a four-point play, and Texas was back within four.

Mo Bamba wanted to play against Iowa State in the first round. He didn’t. He wanted to play against Texas Tech but was held out of the starting lineup. Maybe he wasn’t going to play; maybe the Horns thought it was best he sit it out. But after watching UT get off to a bad start, Bamba was up and headed into the game.

Bamba, a Harlem, N.Y., native, knows full well the history of Willis Reed. He didn’t need to come in and score 20, though. Texas got a shot of adrenaline from his mere presence.

How can the team’s best defensive player get beat backdoor three times? Somehow that happened to Roach. Tech’s Keenan Evans ran the same play three times, running off a screen and getting a wide-open layup each time. Roach had no help from anyone on any of the plays.

For the second consecutive night, Texas had a horrific start. It’s almost unbelievable how the Horns missed shot after shot in the first five, scoreless minutes. Texas opened the game 0-for-9 shooting and 0-for-6 from 3-point range. The Raiders jumped out to an early 9-0 lead. Texas finally got on the board with Kerwin Roach’s jumper with 14:42 left in the first half.

The Horns steadily climbed back into it. Bamba’s 3-pointer just before halftime made it a seven-point game at the break. Texas was 2-for-10 from 3-point range in the first half while Tech was 7-for-11.

Texas will now head home and await its fate from the NCAA Tournament selection committee. ESPN’s “Bracketology” analyst, Joe Lunardi, moved the Horns into the first round thanks to a win over Iowa State. CBS Sports also projects Texas to escape the play-in game in Dayton, Ohio. But only the NCAA committee knows for sure.

This week in mock drafts: After the NFL Combine, are stocks rising or falling at Texas?