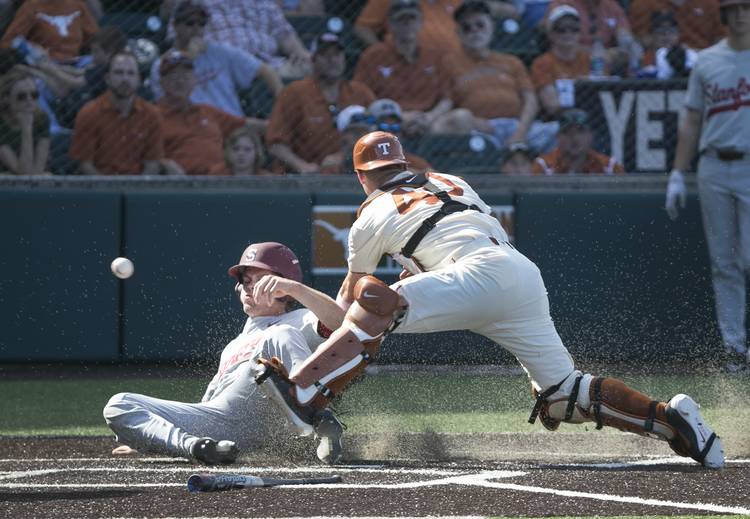 Texas' catcher Michael McCann cannot come up with the ball on a deep throw and make the tag on Stanford's Nico Hoerner as he scores in the third inning. The Texas baseball team faces Stanford in Game Three of a weekend series at UCF Disch-Falk Field Saturday afternoon March 10, 2018. RALPH BARRERA / AMERICAN-STATESMAN

A four-run second inning propelled the No.5 Stanford Cardinal to a 9-3 win over the No. 20 Texas Longhorns on Saturday at UFCU Disch-Falk Field.

UT sophomore Blair Henley, who entered with a 2-0 record, started the game. Henley had only allowed one run in 17 innings pitched so far this season. He gave up his second earned run of the season four batters into the game.

Stanford scored four more runs in the second inning, giving them a 5-0 lead. The Longhorns, who scored one run on six hits Friday , sliced into the deficit when redshirt freshman Zach Zubia blasted a three-run home run over the left field fence in the fourth inning. Zubia’s third home run brought home Texas’ only runs of the day. Stanford scored four more runs in the ninth.

Henley was tagged with the loss, dropping him to 2-1 on the season.