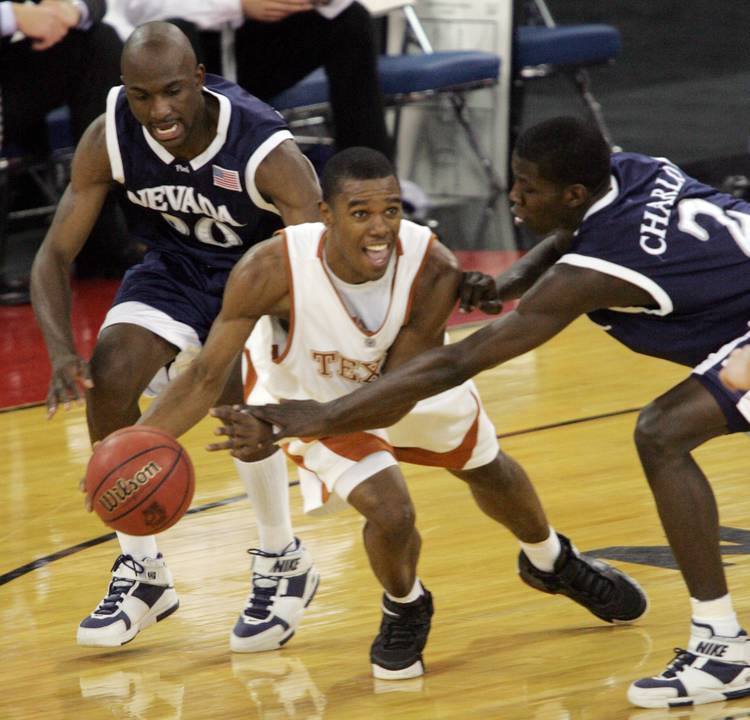 Texas guard Daniel Gibson, the Big 12 freshman of the year in 2005, struggled in a first-round NCAA Tournament loss to Nevada. (AP Photo/AJ Mast)

Does something feel familiar about this NCAA Tournament first-round matchup for Texas? It should.

The Longhorns met Nevada under similar circumstances in 2005, a meeting that will stir bad memories for burnt orange diehards. Eighth-seeded Texas led in the final minutes before allowing the No. 9 seed Wolf Pack to score the final eight points in a 61-57 nail-biter.

RELATED: ‘Nev-ADD-uh’ piles up the points this season while Texas has struggled

Despite holding Nevada star Nick Fazekas to 10 points on 3 of 14 shooting, the Longhorns struggled to convert inside. Here’s what reporter Mark Rosner wrote in the Austin American-Statesman:

On Thursday, Nevada offered access to the rim with relatively little obstruction. It was a gift that the Longhorns fumbled.

Texas, taking most of its shots inside, hit a paltry 35 percent, losing to Nevada 61-57 in the opening round of the NCAA tournament in front of 26,804 fans at the RCA Dome.

Texas did not score during the final 2 minutes, 24 seconds, producing missed shots inside by Jason Klotz and Kenton Paulino, a turnover by Paulino, and an ill-advised three-point attempt by Daniel Gibson.

This time around, Nevada is the higher-seeded team in a 7-10 matchup with Texas as the trendy upset pick. For the diehards, a win on Friday could help heal some wounds from that loss that ended a stretch of three-straight Sweet 16 appearances for Texas.

Of course, the guys who will be on the floor were in grade school.