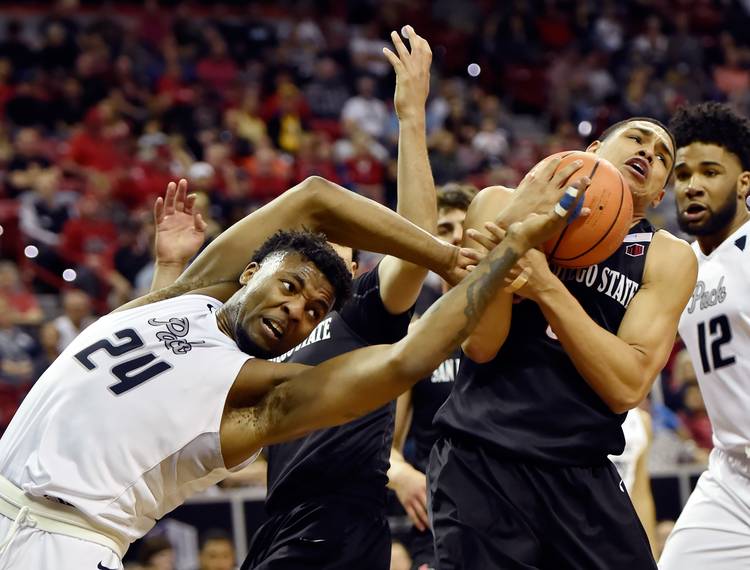 Jordan Caroline #24 of the Nevada Wolf Pack and Trey Kell #3 of the San Diego State Aztecs vie for the rebound during a semifinal game of the Mountain West Conference basketball tournament at the Thomas & Mack Center on March 9, 2018 in Las Vegas, Nevada. (Photo by David Becker/Getty Images)

About the series: Nevada leads the all-time series 1-0. The only matchup between these two programs happened in the 2005 NCAA Tournament. Texas center Jason Klotz scored a career-high 20 points and Brad Buckman had 14 points and 11 rebounds. But the Wolf Pack scored the game’s final eight points to give the Horns a heart-breaking 61-57 loss in Indianapolis.

About the Longhorns: Junior Dylan Osetkowski had a simple thought about the week. “Definitely a sigh of relief that we’re in,” Osetkowski said. “Now that we’ve made it, I think the next thing is what do we want to do here?” Osetkowski is arguably a huge X-factor for the Horns. He finished in double figures for seven games before scoring only four against Texas Tech in the Big 12 tournament. … Jericho Sims’ father, Charles, played for Nevada coach Eric Musselman’s father, Bill, at Minnesota. … UT is one of eight schools to play in 18 of the last 20 NCAA Tournaments. Texas lost its last appearance in the NCAAs two years ago on a half-court, buzzer-beater by Northern Iowa’s Paul Jespersen.

About the Wolf Pack: For all the talk about the Martin twins, Jordan Caroline has scored at least 20 points in the last five games. The former transfer from Southern Illinois is a career 33.5 percent shooter from 3-point range. Nevada is 25-2 whenever Caroline has a double-double. … Nevada is 4-4 this season against other teams in the NCAAs. That includes losses to Texas Tech and TCU. … G Lindsey Drew suffered a ruptured Achilles in his right foot on Feb. 14 and was lost for the season. The junior was averaging a career-high 8.8 points per game. … This is Nevada’s eighth all-time appearance in the NCAAs. The program has never gone beyond the Sweet 16.

‘One of the greatest coaches of all time’: What people are saying about the passing of Augie Garrido

Texas forward Rellah Boothe will not play in NCAAs