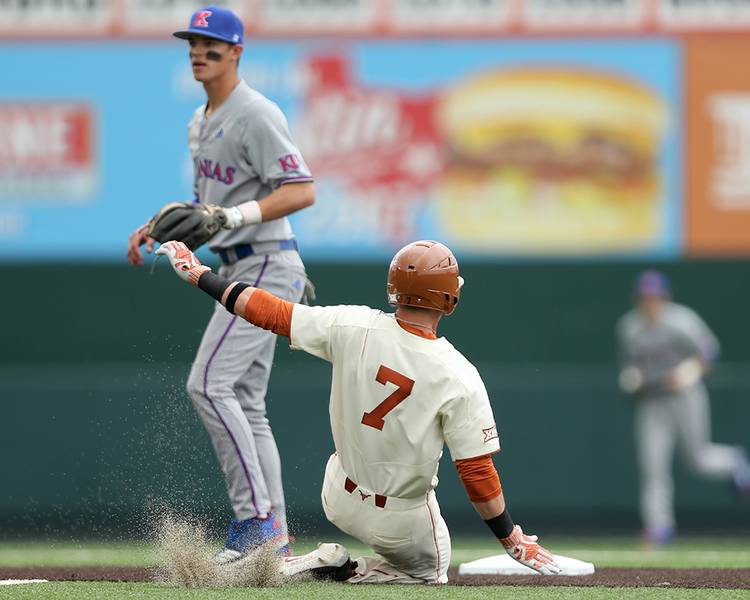 Texas shortstop Masen Hibbeler slides in safe at second base against Kansas at UFCU Disch-Falk Field on March 17, 2018. JAMIE HARMS / FOR AMERICAN-STATESMAN

After sweeping through their conference-opening series against Kansas, Texas picked up two additional wins on Monday.

Juniors Kody Clemens and Masen Hibbeler have respectively been named the Big 12’s player and newcomer of the week. Clemens and Hibbeler join Blair Henley, who was the conference’s top pitcher during the second week of the season, as Longhorns honored by the Big 12 this season.

“He’s not only a leader; he’s just fun,” UT coach David Pierce said after the Longhorns beat Kansas on Saturday. “When he’s swinging it well, he’s as good as anybody.”

A Odessa College transfer, Hibbeler hit .333 for the Longhorns last week. He scored five times and crushed his first home run as a Longhorn.  Hibbeler started the season at second base before moving to the outfield, but he filled in for injured shortstop David Hamilton against the Jayhawks.

“I’m just going to do what I do, wherever Coach tells me to go,” Hibbeler said this weekend. “I’m fortunate enough to be able to play all those positions. I’m just going to keep trying to do my best at each position he puts me at.”

Before spring practices kick off, Longhorns post winning numbers in the weight room