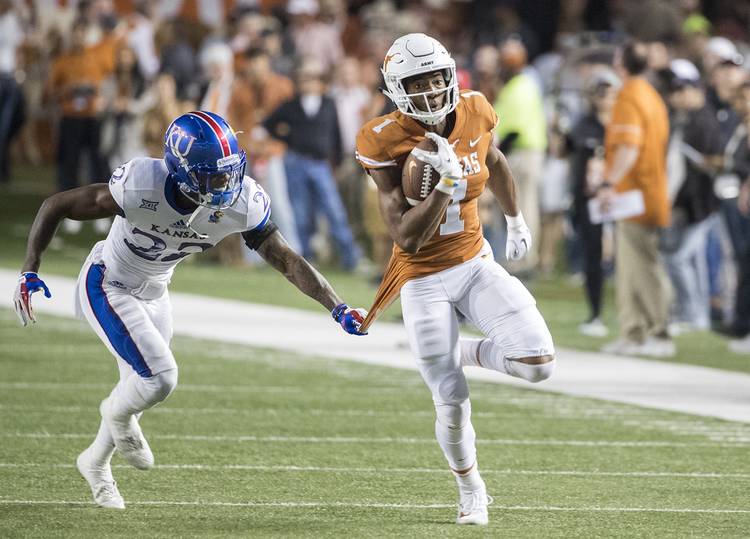 Texas wide receiver John Burt, running for yardage against Kansas last season, will compete in the 110-meter hurdles at the NCAA meet. (RICARDO B. BRAZZIELL / AMERICAN-STATESMAN)

Over the next couple of months, Texas fans can catch wide receiver John Burt on the football field and track.

On Monday, Texas coach Tom Herman told reporters that Burt will participate in both football and track and field this spring. Last year, Burt sat out most of the indoor and outdoor track seasons as he focused on his role within the football program. Burt, who hails from Tallahassee, Fla., is currently a junior.

Herman said he encourages his football players to engage in other activities. He added UT is currently recruiting two athletes that may also want to play basketball and baseball at the school. Joshua Moore, a four-star member of Texas’ 2018 recruiting class, recently told Inside Texas that he’ll also participate in track once he gets to the 40 Acres.

Herman, however, firmly stated that Burt’s priority will be football. He’ll only be allowed to miss football activities if he has a track meet.

“John hasn’t missed anything from a football standpoint yet. Now he might have done it at different times because of his training schedule for track,” Herman said. “Football also pays for your scholarship too, so you’ve got to be committed to not missing anything.”

Burt is averaging 14.6 yards over the 57 receptions he has recorded at Texas. He had a 90-yard catch against Oklahoma State, which is the longest play in school history that didn’t result in a touchdown. He has also scored four times during his collegiate career.

On the track, Burt is one of the Big 12’s best hurdlers. He has logged top-three finishes in the 110-meter hurdles at each of the Big 12’s last two outdoor championships.

Texas’ spring game is scheduled for April 21, so Burt may have to miss the Michael Johnson Classic in Waco. The Texas Relays will be held from March 28-31.

Before spring practices kick off, Longhorns post winning numbers in the weight room