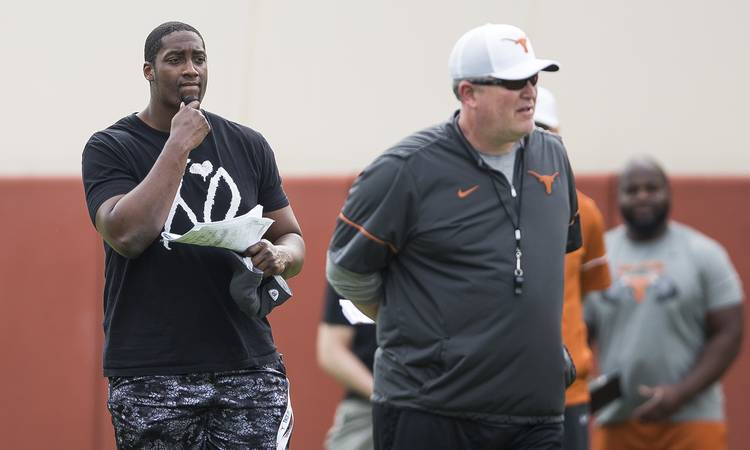 Texas offensive line coach Herb Hand worked with graduate transfer Calvin Anderson to get him up to speed as quick as possible. NICK WAGNER/American-Statesman Staff

Texas held its second practice of the spring on Thursday, and the media was granted access to around 30 minutes of drills. Here are three observations:

1. A few days after he signed with the Longhorns, Calvin Anderson checked out the sights and sounds at the Frank Denius Fields.  As his future teammates practiced, Anderson was seen talking with Texas offensive line coach Herb Hand.

The 6-5, 300-pound Austin native will arrive as a graduate transfer. He started the final 36 games of his tenure at Rice. Anderson is expected to be the Longhorns’ left tackle when UT opens its season at Maryland on Sept. 1.

For the second straight practice, Denzel Okafor lined up as the first-string left tackle for an offensive drill that was open to the media. Okafor, who will be a junior this fall, has started four times in his career.

2. With Kyle Porter slowed by an ankle injury, Daniel Young and Toneil Carter are the top two running backs on UT’s depth chart. Rising junior Tristian Houston, however, has gotten some reps with Texas’ first-string offense this week.

On Monday, Texas coach Tom Herman praised the progress shown by Houston during the off-season.

“I’m looking forward to seeing him putting pads on,” Herman said. “He was a guy that didn’t merit a whole lot of touches last year but came in in bowl practice and really turned some heads in a positive way and has followed that up with a good offseason. I think we all know that we’ve got to get better at that position and so, like any position, there is no incumbent. ”

Houston has only earned three carries in his collegiate career, and those were all recorded in a rout of UTEP in 2016. Last year, the one-time three-star recruit’s biggest contributions were made on UT’s scout team. When Texas prepared for teams like Maryland and Kansas State, Houston mimicked the opponent’s mobile quarterback in practices.

3. Among the spectators at Thursday’s practice were Malik Jefferson and Armanti Foreman. Jefferson was the Big 12’s Co-Defensive Player of the Year in 2017, and Foreman had a team-high four touchdown catches. Jefferson and Foreman are currently preparing for the NFL Draft. UT’s pro timing day is set for March 28.

The Texas Exes got a chance to interact with staff members and their former teammates. At one point, Texas receiver Davion Curtis yelled at Jefferson to “Tell Wayne to call me.” Jefferson is represented by an agency fronted by rapper Lil Wayne.