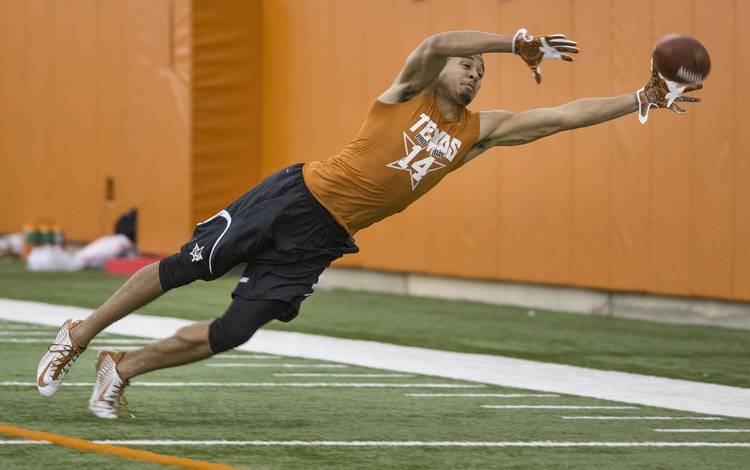 Last year, 32 receivers were selected in the NFL Draft.

Texas seniors Armanti Foreman, Lorenzo Joe and Dorian Leonard hope to get drafted next month. Thanks to an ex-teammate, however, the Texas trio has a map to the NFL even if the players don’t figure into this year’s quota of receivers.

At Texas’ pro timing day on Wednesday, Foreman, Joe and Leonard each talked about Marcus Johnson’s NFL career. The players said that Johnson, who was their UT teammate and fellow receiver from 2014-15, was a source of inspiration.

“I feel like talking to him is going to really help me in my next step, no matter what happens,” said Foreman, who has drawn some interest from a few teams. “I know that a guy that was in the same place that I’m in right now, he was able to push forward and step over that hurdle. I feel like I can do that same thing.”

Johnson was not selected in the 2015 NFL Draft. He signed with Philadelphia as an undrafted free agent but was eventually cut. Johnson worked his way back onto Philadelphia’s practice squad and then appeared in 10 games this past season. In February, he won a Super Bowl ring with the team.

This off-season, Johnson was traded to Seattle in a deal that included defensive lineman Michael Bennett and two draft picks.

“I knew if he was given the opportunity, he would take advantage of it,” Joe said. “He’s done that and he got him a ring. I’m looking forward to seeing him in the future, especially with the Seahawks.”

Read more: A reunion in Houston may be ‘far-fetched,’ but Armanti Foreman looks to join his twin in NFL

The six-foot Foreman, who weighs 210 pounds, led UT in receptions and receiving yards in 2016. He had a team-high four touchdown catches this past year. Foreman’s twin brother, D’Onta, is entering his second season as a running back with the Houston Texans.

Leonard developed into a reliable target over the past two seasons as he recorded 47 catches and 544 receiving yards in 2016 and 2017. The 6-5, 205-pound Leonard collegiate career ended when broke his foot with three games left in his senior year. He said this week that he was cleared to resume his training about two months ago.