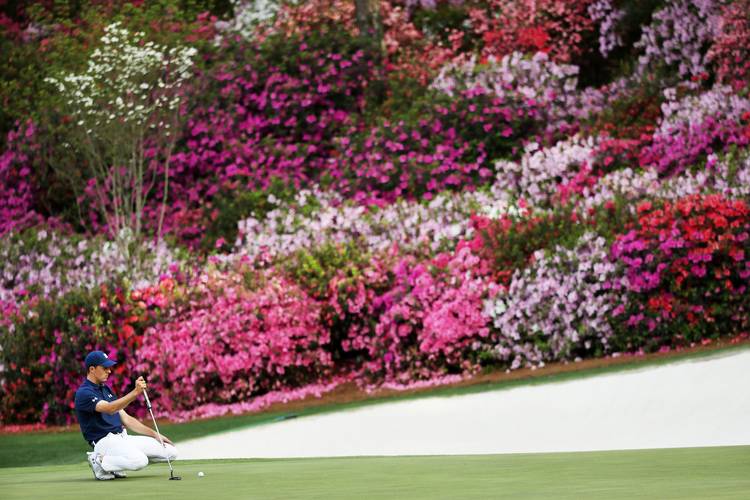 AUGUSTA, GA - APRIL 05: Jordan Spieth of the United States lines up a putt on the 13th hole during the first round of the 2018 Masters Tournament at Augusta National Golf Club on April 5, 2018 in Augusta, Georgia. (Photo by Patrick Smith/Getty Images)

The 2015 Masters champion birdied five straight holes beginning at the 13th, pushing his score to 7 under with a couple of holes to play. He has a three-shot lead over Tony Finau and Matt Kuchar.

Spieth already has three major titles on his resume, even though he won’t turn 25 until late July.

He’s certainly off to a good start in his quest for No. 4.

Read more on the Masters here.

Texas senior Doug Ghim carried the flag for the seven amateurs at the Masters by holing out for eagle on the 18th hole for an even-par 72.

Ghim qualified as the runner-up at the U.S. Amateur last summer at Riviera. He was 2 over for the round when his approach landed about 10 feet short of the flag and rolled into the cup. It was only the sixth eagle on the 18th hole at the Masters, and the first since Chris DiMarco in 2006.

British Amateur champion Harry Ellis had a much tougher time. He opened with a double bogey, started the back nine with a triple bogey and shot 86. Matt Parziale, the firefighter from Brockton, Massachusetts, who won the U.S. Mid-Amateur, managed three birdies but still shot 81.

Defending champion Sergio Garcia made history — not the good kind — in the opening round of the Masters on Thursday.

Garcia carded a 13 on the par-5 15th after hitting five shots into the water in front of the green.

He matched the highest single-hole score in Masters history.

The meltdown left Garcia at 10 over in the opening round and 14 shots behind the leaders.

Garcia rebounded with a birdie on the par-3 16th, but he’s now a long shot to make the cut Friday.

WATCH: Texas golfer Doug Ghim holes out from fairway to finish even-par 1st round at Masters