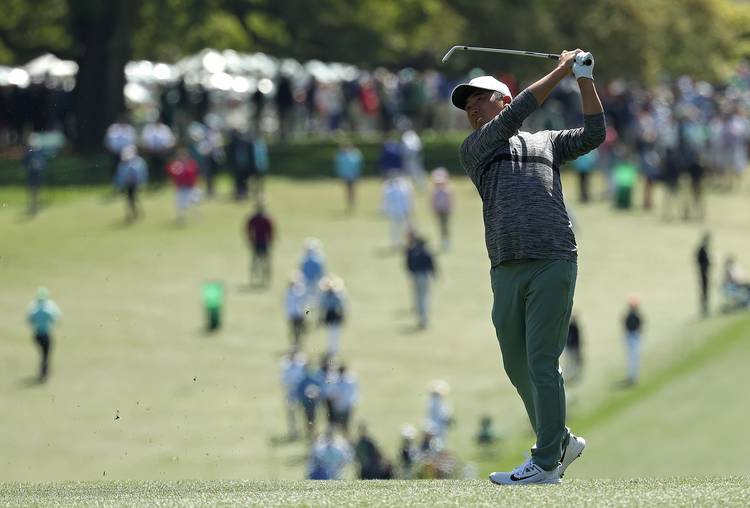 AUGUSTA, GA - APRIL 05: Amateur Doug Ghim of the United States plays a shot on the first hole during the first round of the 2018 Masters Tournament at Augusta National Golf Club on April 5, 2018 in Augusta, Georgia. (Photo by Patrick Smith/Getty Images)

Golf world, meet the next Texas star you need to be worried about.

Doug Ghim shot the low round by an amateur during the first round of the Masters on Thursday, and he made some fireworks on the back nine.

RELATED: Bohls: Texas’ Doug Ghim is a man with game and a Masters plan

The Texas senior created one of the highlights of the tournament so far, holing out from the fairway at hole No. 18 for only the sixth eagle on that hole in tournament history.

Of the four eagles made by 4 p.m. CT, Ghim had two of them. The other came at hole No. 13, where he stuck his approach close and drilled this putt.

First eagle of the Tournament goes to U.S. Amateur runner-up @DougGhim at No. 13. #themasters pic.twitter.com/4WnbPYgMlO

Ghim’s blistering finish — he shot 3-under par 33 on the back nine — sets him up well heading into the second round. By late Thursday afternoon, only 10 players had reached the clubhouse under par. None of the other amateurs was at even par.

Ghim tees off at 7:41 a.m. CT on Friday. He is one of four Longhorns in the field, with Jordan Spieth, Jhonnatan Vegas and Dylan Frittelli.