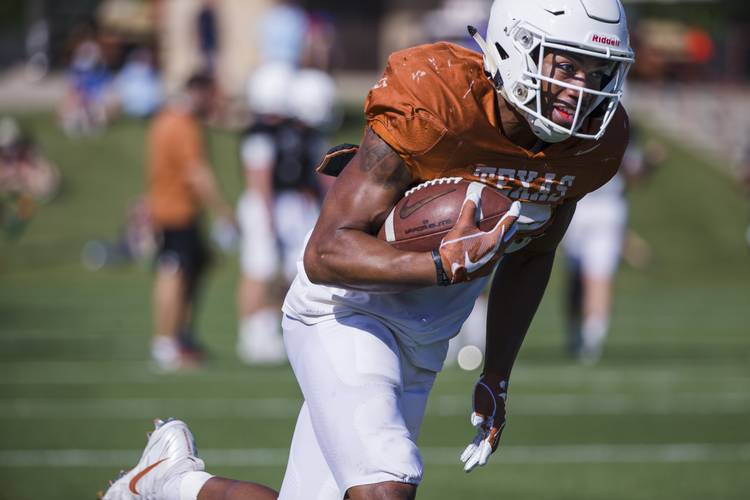 Texas receiver Jerrod Heard participates in drills during a spring practice at the Denius Fields on April 10, 2018. AMANDA VOISARD / AMERICAN-STATESMAN

Texas held its 11th practice of the spring on Thursday, and the media was granted access to around 20 minutes of drills. Here are three observations:

1. On Thursday, media members entering the Denius Fields were first greeted by the sight of Jerrod Heard running the football. And no, Heard wasn’t acting as a wildcat quarterback.

Heard participated in a drill in which he lined up in the slot before motioning to the backfield for a handoff. Lil’Jordan Humphrey went through the same routine, which was oversaw by Texas coach Tom Herman. Heard will be a senior next year while Humphrey just completed his sophomore season.

Plenty of playing time at the “H” receiver has become available since Reggie Hemphill-Mapps left the program and Armanti Foreman exhausted his eligibility. Humphrey started six times last year and Heard had a 20-catch season. Redshirt freshman Jordan Pouncey could also run some routes out of the slot.

Last week, Herman was asked about the attributes he wants from his slot receiver. It looks like the 6-2, 205-pound Heard and the 6-4, 220-pound Humphrey, who have both played multiple positions at Texas, fit the bill.

Said Herman: “I think ideally, you would like a guy that can motion in the backfield and do some things out of the backfield, mainly on some speed sweep-type things but also be able to hand the ball off on other things. You’d like a guy that is quick and fast enough to make plays in space in the RPO (run-pass option) game, on bubbles and quick-hitters, if you will.”

If needed, Herman said he’ll adjust the job description at the “H” position. During his final year at Houston, Herman had the undersized Linell Bonner line up in the slot. Bonner led the Cougars in receptions (98) and receiving yards (1,118).

2. During one portion of practice, Herb Hand had a fiery outburst that was noticeable. Thursday’s practice did come with some good news for the offensive line coach, though.

Offensive lineman Patrick Hudson went through part of Thursday’s practice. Hudson injured his knee in last year’s 56-0 win over San Jose State. A 6-4, 335-pound tackle, Hudson should provide some additional depth during what will be his sophomore season.

3. True freshman Anthony Cook was opposite Kris Boyd as the line leaders for the cornerbacks during one drill. Senior-to-be Davante Davis, who has started 14 times in his career, is nursing an ankle injury.

Cook was the fifth-rated player on the American-Statesman’s Fabulous 55 list of 2018 recruits. The Houston Lamar product was also a four-star signee. Cook is one of nine players who enrolled early this spring.