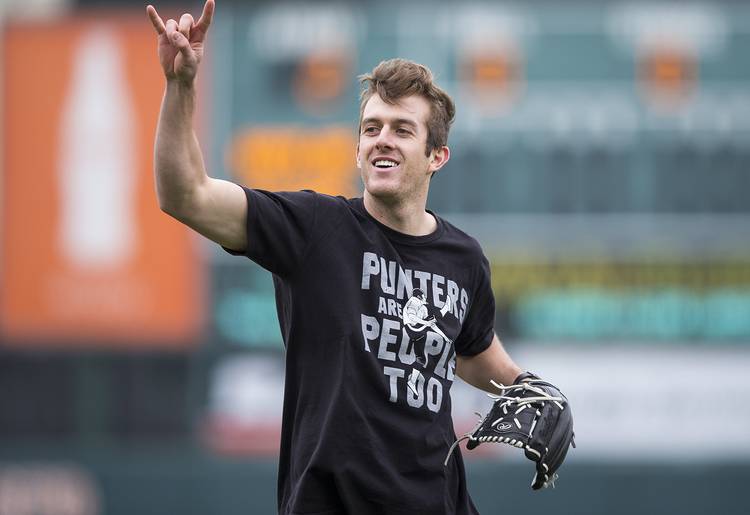 Former Texas punter Michael Dickson puts his horns up after throwing out the ceremonial first pitch before a baseball game between Texas and Baylor in Austin on April 7, 2018. NICK WAGNER / AMERICAN-STATESMAN

Will Connor Williams become a Brown? Will Malik Jefferson become a 49er?

Dickson was selected by Oakland in two of this week’s mock drafts. That makes sense since the Raiders recently cut Marquette King and former UC Davis specialist Colby Wadman, who has yet to appear in a NFL game, is the only punter on Oakland’s roster. The Las Vegas Review-Journal’s Michael Gehlken has reported that the Raiders have worked out Dickson.

We’ve already seen Dickson tied to Houston and Kansas City in previous round-ups, although both of those teams recently signed long-tenured punters to extensions. NFL.com sent the punter to the New York Giants with a third-round pick in February. In 18 of the past 19 years — with last year being the exception — a punter has been chosen in the NFL Draft. Dickson is trying to become only the third punter to be drafted after leaving school early.

The NFL invited seven punters to its combine, and Dickson was the only one who had a Ray Guy Award in his trophy case. Dickson averaged 47.43 yards per punt during a 2017 season that concluded with MVP honors in the Texas Bowl. Last season, only six punters in the NFL bettered Dickson’s average punt.

We heard he's accurate and it was most definitely a strike. Thanks for coming, @mdcksn! #ThisIsTexas #HookEm 🤘 pic.twitter.com/7RWz1Dj2Ex

And hey, maybe Dickson can try out a different sport if the NFL doesn’t call. Ahead of UT’s 2-0 win over Baylor last week, Dickson threw a strike during a ceremonial first pitch. After the game, Texas coach David Pierce left a positive review on the baseball novice’s scouting report.

Arjei Henderson, the No. 2-ranked player on the Fabulous 55, chooses Oklahoma