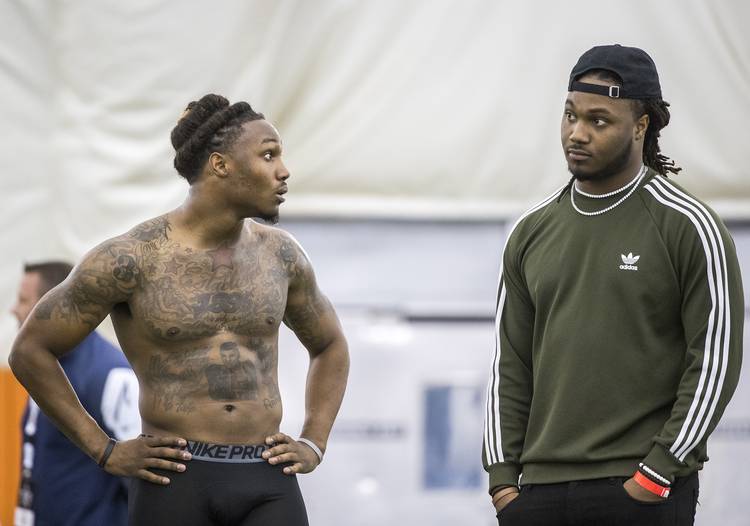 Former UT football players Armanti Foreman, left and D'Onta Foreman, right, looks on during a break as otherUT football players work out to attempt to impress NFL scouts for their pro career during Texas Football 2018 Pro Timing Day held at the Bubble at Denius Fields on Wednesday, March 28, 2018. RICARDO B. BRAZZIELL / AMERICAN-STATESMAN

D’Onta Foreman’s path to the NFL is well documented. When he landed at Texas, it was actually twin brother Armanti Foreman who was the more sought after recruit.

Then D’Onta, the former two-star running back recruit, led the country with 2,028 rushing yards as a junior and left early for the NFL Draft — where he was taken No. 89 overall by the Houston Texans.

RELATED: A reunion in Houston may be ‘far-fetched,’ but Armanti Foreman looks to join his twin in the NFL

Now Armanti is the overlooked prospect, and D’Onta Foreman is sticking up for him.

In a letter addressed “Dear NFL Coach” published by The Players’ Tribune, D’Onta Foreman butts back at some of the things he’s seen on the internet about Armanti.

“Look, I know you’ve probably heard some things about my brother,” the letter begins.

Longhorns fans know all too well what D’Onta is talking about. In 2017, Armanti Foreman saw his playing time dwindle and caught 31 passes for 280 yards and four touchdowns. While many thought he would be a focal point of the offense in coach Tom Herman’s first season, Armanti Foreman didn’t play at all in three-straight games.

The twins’ father, Derrick Foreman, hinted on Twitter that the Texas coaching staff may have held a grudge against Armanti. Herman said that Armanti Foreman was benched for being, “a really bad practice player, and I’m not telling you anything I haven’t told him.”

All of that, and the aftermath, seems to be what D’Onta Foreman addresses throughout his Players’ Tribune letter.

“I can tell you straight up that Armanti will give you max effort every time out, the reality is just that my brother is a little bit different in how he goes about his business,” D’Onta Foreman writes. “He’s not the rah-rah type. He likes to observe, and he doesn’t always say a ton. He’s just a really calm and collected guy, and some people, unfortunately, take that to mean that he doesn’t care, or that he’s not serious enough about wanting to be great.

“That couldn’t be further from the truth.”

D’Onta Foreman also writes that his brother is “more talented, all around, than I am,” and compares Armanti’s skills to those of Texans teammate De’Andre Hopkins.

“Armanti’s not some pass-catching alien like Nuk,” D’Onta Foreman said. “He’s still from this planet and whatnot. But trust me when I say that my brother can play, and that he will work his butt off to help your team win.”

One thing is for sure. The Foreman twins stick together. Just like they did at Texas.