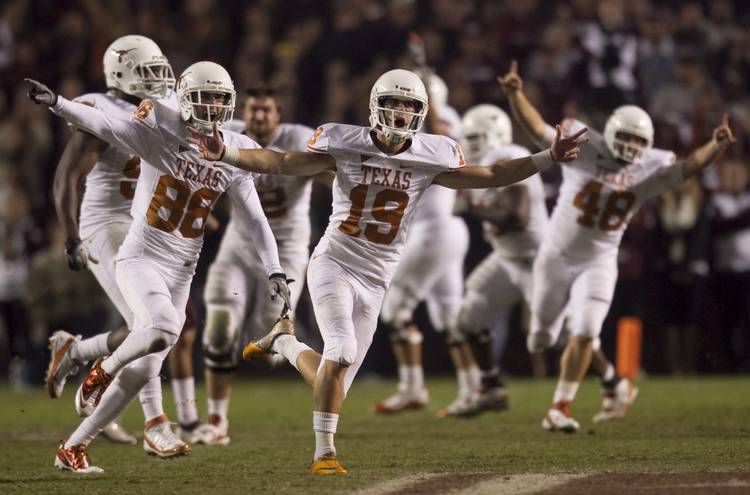 With the NFL Draft approaching, much of the focus is on who’s going No. 1, who will drop in the draft and what team is poised to make the best picks.

But one of most fun things to keep track of is who doesn’t get drafted and where do these college stars wind up? Every year more than a handful of undrafted rookies make NFL rosters coming out of camp. Some have gone on to Hall of Fame careers, like Dick “Night Train” Lane, Kurt Warner and John Randle.

ESPN recently compiled a list of the best undrafted players in every NFL team’s history. And yes, there is a Longhorn.

Texas has produced hundreds of NFL players in the history of the draft, but one of the most successful Longhorn pro is someone who can be overlooked because of the position he plays: Justin Tucker, kicker.

MORE COVERAGE: This week in mock drafts: So, which NFL team wants to draft Texas’ punter?

In 2016, we ranked Tucker No. 3 on our list of best undrafted Texas football players, listing Holmes No. 1 and another kicker, Phil Dawson, No. 2.

Tucker is the easy pick for the Ravens, considering Holmes’ best seasons came with the Kansas City Chiefs. As hard as it is to make the Pro Football Hall of Fame, it’s even more difficult to make it as a kicker, but the way Tucker’s career is tracking, he’s definitely on a hall of fame path. Tucker, who won a Super Bowl with the Ravens, is a two-time first team All-Pro and a two-time Pro Bowler. He is the fastest kicker ever to reach 800 career points.

For his career Tucker is 202 of 224 on field goals, 90.2 percent, which makes him the most accurate kicker in NFL history.

Of course Texas fans remember him for this:

D’Onta Foreman: ‘Here’s why you should draft my brother’