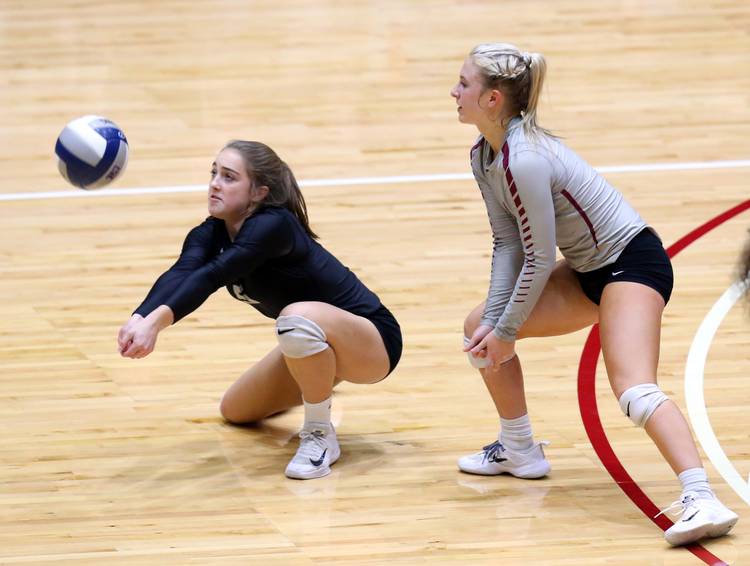 Rouse's Reilly Heinrich (#5) digs for the ball against Prosper as teammate Katy Northcut looks on in the Class 5A championship match on Nov. 18, 2017 in Garland. (Richard W. Rodriguez for AMERICAN-STATESMAN)

In two years, Reilly Heinrich will make a short move from Leander to the 40 Acres.

A libero who is finishing up her sophomore year at Leander’s Rouse High, Heinrich gave a verbal commitment to Texas’ volleyball program this week. Texas Tech signee Katy Northcut was Rouse’s libero this past season, but Heinrich still averaged 2.3 digs per set according to Maxpreps.com. With Heinrich on its roster, Rouse reached the Class 5A championship game.

The 5-5 Heinrich also plays for the Austin Juniors volleyball club.

so excited to announce I have committed to play volleyball at The University of Texas!! #hookem #texasvolleyball pic.twitter.com/NpOhc9hzb4

16 Mizuno's Reilly Heinrich is (and has apparently always been) a future Longhorn! She has committed to play collegiate volleyball at the University of Texas! pic.twitter.com/l1URzYzt3W

Heinrich joins a recruiting class that already includes Mansfield Lake Ridge outside hitter Madison Williams and Naomi Cabello, a setter from Florida. Those players won’t arrive at Texas until 2020.

Sydney Petersen is the only libero currently in UT’s program who is expected to be around in 2020. Peterson signed with Texas in November and will be a freshman this fall.

Bohls: Malik Jefferson a third-round pick at the earliest per one NFL draft analyst