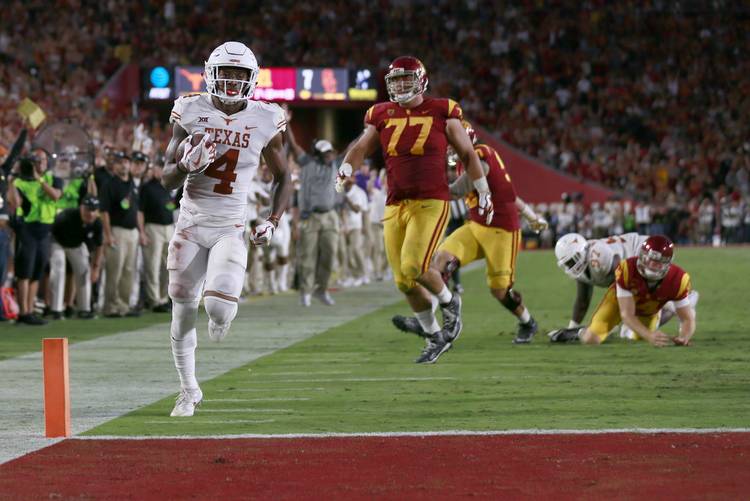 Texas defensive back DeShon Elliott (4) scores after intercepting USC quarterback Sam Darnold (14) at the Los Angeles Memorial Coliseum on Sept. 16, 2017. Experts expect Elliott and Darnold to both be taken in next week's NFL Draft. RICARDO B. BRAZZIELL / AMERICAN-STATESMAN

Will Connor Williams become a Viking? Will Malik Jefferson become a Texan?

Last year, D’Onta Foreman became the first Texas running back taken in the NFL Draft since 2009. Like Foreman in 2017, Williams and Dickson will be chasing history next week. On the other hand, Jefferson, Elliott, Hill and Ford will be looking to continue a trend for Texas at the NFL Draft.

Texas last had an offensive lineman selected in 2008 when Pittsburgh took Tony Hills in the fourth round. Ex-Texas punter John Teltschik was once drafted, but he became a Chicago Bear in 1986.

In 2015, the Longhorns sent a linebacker (Jordan Hicks) and two defensive backs (Mykkele Thompson and Quandre Diggs) to the NFL Draft. Thanks to Hassan Ridgeway and Malcom Brown, UT has had a defensive tackle selected in two of the last three drafts.