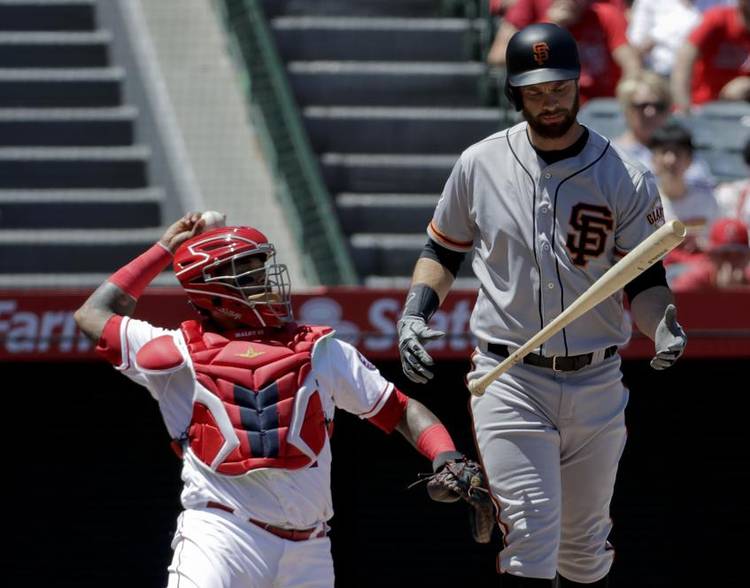 ANAHEIM, Calif.– Brandon Belt of the San Francisco Giants saw 21 pitches in an epic plate appearance against Los Angeles Angels rookie right-hander Jaime Barria in the first inning Sunday, the most since records began in 1988.

The previous high of 20 pitches in a plate appearance since 1988 was when Houston’s Ricky Gutierrez struck out against Cleveland’s Bartolo Colon on June 26, 1998, according to Retrosheet.

The left-handed Belt peppered the crowd with plenty of souvenirs by fouling off 11 straight pitches, including two long fouls down the right-field line, before lining out to right fielder Kole Calhoun.

Belt was greeted with high-fives when he returned to the dugout.

It took nine pitches for Belt to work the count full, as he fouled off five pitches in the process. He swung and missed just once.

Angels pitching coach Charles Nagy made a mound visit to check on Barria after the Belt at-bat. Barria had thrown nine pitches to Joe Panik, who hit a leadoff single, before throwing 21 to Belt.

Barria threw 49 pitches in the first inning. He loaded the bases with one out before retiring Evan Longoria and Pablo Sandoval.

Back-to-back: Texas holds off Oklahoma State and Baylor to win another Big 12 title