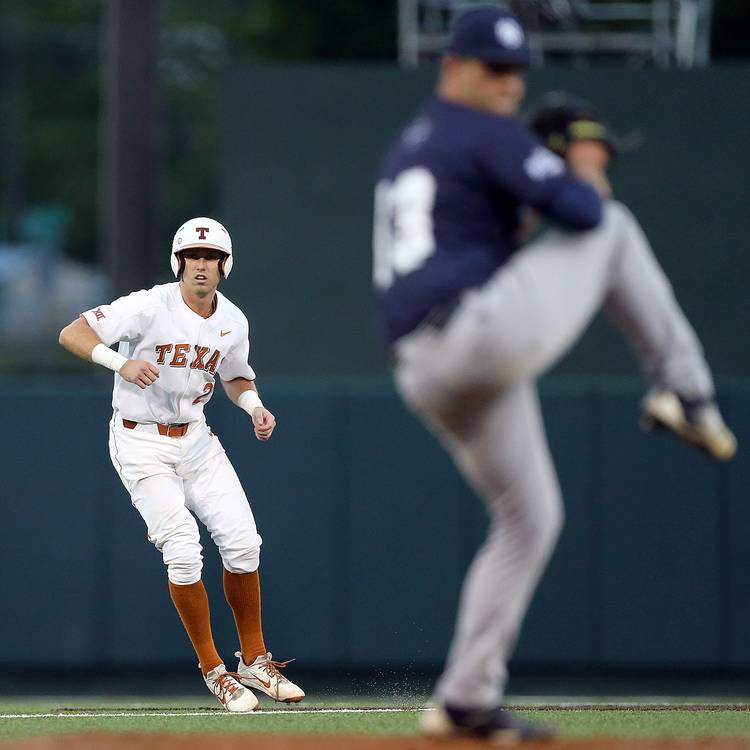 Texas junior Kody Clemens takes a lead off of second base against New Orleans at UFCU Disch-Falk Field on April 20, 2018. JAMIE HARMS / FOR AMERICAN-STATESMAN

Since last season, Texas has upped its batting average by 20 points. The Longhorns, however, aren’t just using their bats to get on base.

Texas has walked 244 times this year, which is tied with South Alabama for the 10th-best total in the nation. (Florida State leads all NCAA Division I teams with 285 walks). Texas (31-17) will travel this weekend to see a Texas Tech team that walking 5.4 batters per game.

Zach Zubia (36 walks), David Hamilton (34) and Kody Clemens (32) all rank among the Big 12 leaders in walks. Hamilton has 10 more walks than strikeouts this season. Clemens has almost broken even with his walks and strikeouts (35).

UT’s plate discipline was on display in an 11-10 win over Texas State on Tuesday night. UT trailed by four runs in the ninth inning, but sent five batters to the plate during its comeback. Masen Hibbeler, Duke Ellis and Zubia drew walks against Texas State reliever Brayden Theriot, and Hamilton worked a full count before ending the game with a grand slam.

Everyone wants to be what David Hamilton was, and that’s a hero. But the thing is, when you go up there doing that, you can’t get too excited, you can’t get too jumpy. Coach told us if you get your pitch, swing. I think (Theriot) sprayed the ball around a little bit and everybody got into plus counts. When you get in those plus counts, you’ve just got to make sure that you’re swinging at what you want to hit. You can’t swing out of your zone, because if you do that, you’re going to get yourself out.”

Baseball players have been known to switch up their at-bat songs during a season. Since Texas has been successful with drawing walks, might we suggest one of the Longhorns strolling to the plate to the “Walk This Way” collaboration from Run-DMC and Aerosmith?

Texas hasn’t played a game in Memphis since 1903. Marc Cohn’s “Walking In Memphis” would still be appropriate, though.

What about “I’m Gonna Be (500 Miles)” by the Proclaimers since those 244 free passes cover over four miles of walking?