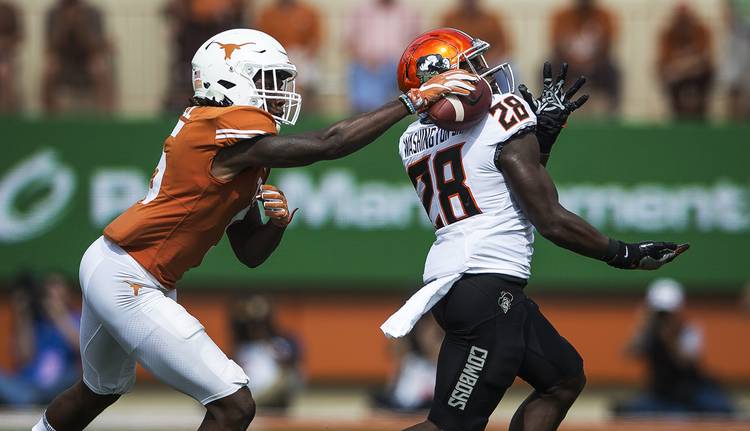 Holton Hill was one of the surprise exclusions from the NFL Draft, as the former Texas cornerback signed an undrafted free agent deal with the Minnesota Vikings.

According to a report from Bleacher Report’s draft guru Matt Miller, there is a very specific reason why NFL teams passed over Hill. Miller’s sources indicate that Hill failed the mandatory pre-draft drug test.

Golden: Holton Hill has good chance of sticking with the Vikings as a free agent

This is the same player who was in the middle of a breakout year for the Longhorns when he was suspended in early November for a violation of team rules. Hill scored three non-offensive touchdowns in the first two games of 2017, and finished the season with 51 total tackles and two interceptions. He spent the final three weeks of the regular season on the scout team before opting to turn pro.

Holton Hill and Desmond Harrison both failed drug tests at the NFL combine, per Bleacher Report. Some may never get it. https://t.co/q2Z9pSPeQD

According to Miller, Hill wasn’t the only former Longhorn who failed his drug test. Desmond Harrison, who left the program following Charlie Strong’s first season in 2014 and landed at West Georgia, was the other.

Harrison went unselected despite posting the fastest 40-yard dash time by an offensive lineman at the combine. He signed with the Browns.