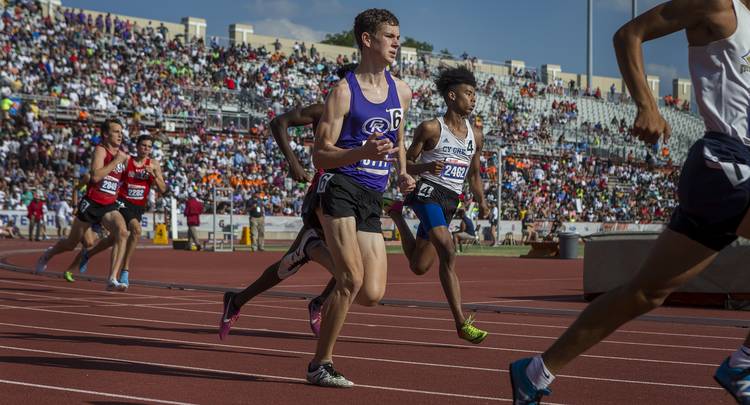 Cedar Ridge senior Sean Prendeville (center) competes in the Class 6A 800-meter race at Myers Stadium on May 12, 2018. (Stephen Spillman / for American-Statesman)

While Texas was competing for Big 12 championships in Waco this weekend, a few future Longhorns were getting comfortable at their new home.

Yoakum senior Joshua Moore has signed with Texas’ football program, but he plans on joining the track team in 2019. Moore won the Class 3A long jump on Friday, and he earned a bronze medal on Yoakum’s 400-meter relay team. Yoakum also won a team title.

Texas-bound running back Keaontay Ingram picked up a bronze medal with Carthage’s 400-meter relay team on Saturday. Will Ingram show up alongside Moore on UT’s track and field roster? Probably not. Ingram told the American-Statesman’s Kirk Bohls that “I’ll be honest. I don’t like track.”

Invited once again to the NCAA tournament, Texas to travel to Seattle-hosted regional