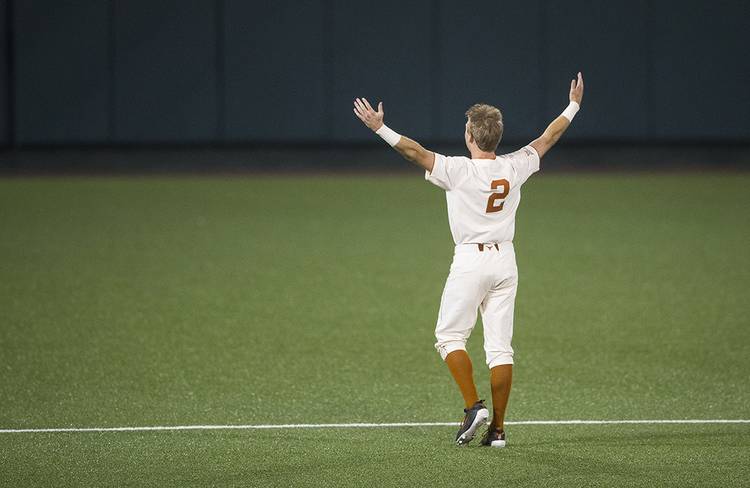 Texas infielder Kody Clemens (2) holds up his arms toward the outfield after Texas defeated Texas State on May 1, 2018. NICK WAGNER / AMERICAN-STATESMAN

Clemens is joined by Oklahoma outfielder Steele Walker and Texas Tech’s Josh Jung and Grant Little among the 35 semifinalists. The finalists for the Dick Howser Trophy, which was first awarded in 1987, will be revealed on June 8. The winner will be announced on June 15.

This dude is a DUDE.@kodyclem has been named a Dick Howser Trophy semifinalist. https://t.co/rav68lnIse 🤘 pic.twitter.com/kIDJExihsJ

A junior, Clemens leads Texas in batting average (.345), runs (49) and RBIs (55). His 16 homers are the most for a Longhorn since Kyle Russell hit 19 in 2008. Clemens has also played solid defense for Texas, which leads the Big 12 in fielding percentage.

Read more: Will Texas baseball host an NCAA regional? (It’d be a lot cooler if they did …)

With Clemens likely batting third, Texas will open a three-game series against TCU on Thursday night. Texas (34-18) was ranked 17th in the D1Baseball poll this week.

Former Longhorn Malik Jefferson is learning Cincinnati and the playbook, and now he’s ready to try the chili