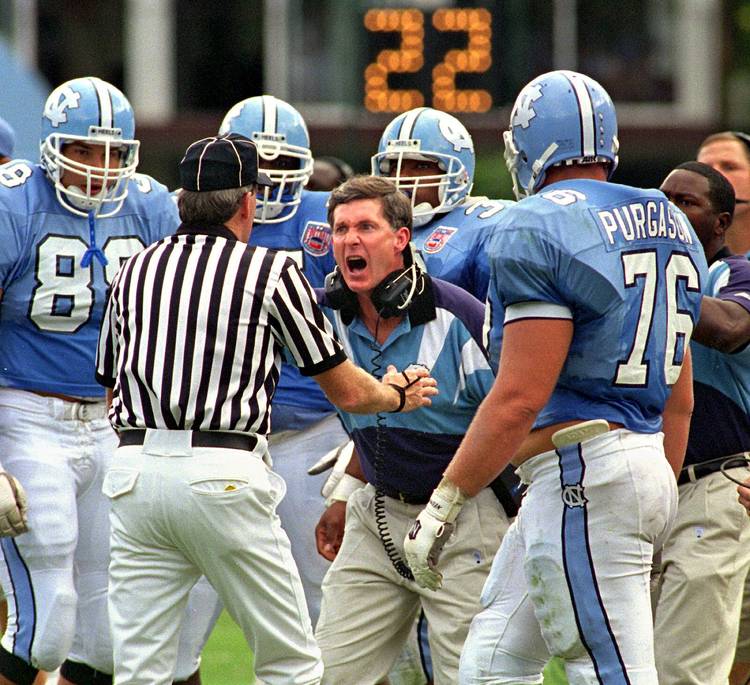 North Carolina's Mack Brown is one of a number of ACC football coaches who have had the occasion to question officials' call this fall. [UNPUBLISHED:] North Carolina head football coach Mack Brown screams at an ACC ref following a reversal of a touchdown scored by Brown's Tar Heels when Georgia Tech fumbled the ball at the two. photo by bob leverone

But he wasn’t always a Longhorn. As we approach the 20th anniversary of Mack Brown’s first season at Texas, let’s take a look at his time before the 40 Acres.

Did you know that Mack Brown and Burt Reynolds have something in common?

In his first season as the OC under Duncan at ISU, the Cyclones improved 3-8 to 6-5 and running back Dwayne Crutchfield rushed for 1,312 yards and 11 touchdowns. Brown’s offense increased scoring by 108 points. In his second season at Iowa State, Crutchfield scored 17 touchdowns as the team went 5-5-1.

Brown left Iowa State to take the quarterbacks coaching job at LSU in 1982.

Brown was hired by Appalachian State in 1983 as head coach. He was just 32 years old. Appalachian State went 6-5 in his first season. Reportedly considered a candidate to take the head coaching job at LSU following the 1983 season, Brown instead returned to Division I football as an offensive coordinator at …

Yes. The two greatest coaches in Longhorn history have strong Oklahoma ties. As the OC in Norman, the Sooners rushed for 2,376 yards and Brown coached Oklahoma notables like Steve Sewell and Spencer Tillman. Oklahoma went 9-2-1 and finished the season No. 6 in the nation. They were Big Eight co-Champions with the biggest win of the season coming against Nebraska, 17-7. He didn’t stay on for a second season.

His curious tenure at Tulane

Brown returned to Louisiana to become the head coach at Tulane in the 1985 season. What’s notable about this is Brown wasn’t just hired to be the head coach, but also the athletic director. Tulane’s athletic department was rocked by a basketball point shaving scandal that led to more than 30 people exiting the department. It wasn’t enough that he was tasked at rebuilding a football program that had gone 3-8 the year before, but he was now tasked to rebuild a department.

Here are a couple paragraphs from a story about Brown’s hiring in August of 1985:

All of this might sound bleak, but the personable and charismatic Brown has a way of making lemons taste like lemonade. He spent the weeks preceding fall football  practice making public appearances every day, attempting to sell his department and team. He`s apparently quite a salesman. Football season ticket sales have topped 12,000, an all-time high.

“It`s been unbelievable. It`s been very positive,” Brown said of the public`s response. “Season football tickets are quite a bit higher than they`ve ever been and we expect that to grow even more in the next week or so. The people have really responded to our program.

“A lot of people who left in the last five or six years are coming back in, and everything looks very positive. We`ve seen a lot of people getting more involved, for whatever reason.”

Year one of Division I head coaching wasn’t great. Brown’s team went 1-10. He steadily improved the program in year 2 and 3, going 4-7 and then 6-6 and reaching a bowl game in 1987. It was Tulane’s fifth bowl game in more than 40 years. It was after Year 3 that Brown’s biggest break came when the North Carolina job opened before the 1988 season.

Mr. Football and a decade at North Carolina

My favorite little nugget of Brown’s tenure at North Carolina is the budding rivalry he had with Duke coach Steve Spurrier.

Spurrier, one of the great college football coaches ever, is a legend at needling rivals and that was the case with Brown, who was hired a year after Spurrier.

Here’s a few paragraphs about Brown coming from Spurrier:

The cruelest and most accurate thing ever said about Mack Brown came from Steve Spurrier. Spurrier was then the coach at Duke. Brown was at North Carolina. Spurrier was fashioning himself into a monomaniacal offensive strategist. Brown was becoming a Reaganesque CEO. When sportswriters traveled that little corner of the ACC, Spurrier would say, “I just don’t think I know enough about the game to compete with Mr. Football.”

Mr. Football. It was a missile fired directly into Brown’s massive heart. It transformed Brown’s best asset, folksiness, into softness. It spoke to a certain lack of edge. In 1989, Spurrier beat Brown’s Tar Heels 41-0 in Chapel Hill. The Blue Devils stayed on the field and took a picture in front of the scoreboard.

Spurrier wouldn’t let the slur go. By 1997, he’d moved to the University of Florida and won a national championship. The sportswriter John Feinstein sent Spurrier a note saying that if he thought he was so great, he should go back to Duke. “Nah,” Spurrier wrote in his reply, “I don’t think I could deal with the pressure of competing with Mr. Football again every year.”

Obviously any football job on Tobacco Road is going to be a difficult one. North Carolina is one of the greatest basketball programs ever, so drumming up support for football isn’t easy. That said, Brown left North Carolina tied with his predecessor Dick Crum for the second-most wins in North Carolina football history, 69. The leader is Bill Dooley.

Brown was 69-46-1 from 1988 to 1997. He never won a conference titles at UNC — that happens when Florida State is in the midst of one of the greatest decades of college football success ever.

He went 2-2 in bowl games. One of those games is one of the most thrilling bowl wins in Texas football history, the 35-31 comeback win in the 1994 Sun Bowl, where Priest Holmes rushed for 161 yards and four touchdowns.

In 1997, Brown led UNC to a 7-1 ACC record as the Tarheels went 10-1. Still in his 40s, Mack Brown never coached in the Gator Bowl against Virginia Tech that season.

There were a lot of names thrown around for Texas. Kirk Bohls of the Statesman wrote that Texas should hire Colorado coach Gary Barnett. Bohls also listed coaches like Terry Bowden, Sonny Lubick, Sherman Lewis, Jim Donnan and John Cooper. At the time Cooper was at Ohio State, and Bohls chimed in that Cooper was the man athletic director DeLoss Dodds wanted to hire 11 years earlier.

Bohls also mentioned Brown, but only in passing.

DeLoss Dodds remembers the minute he wanted Mack Brown to become the next Texas Longhorn football coach. It was at 11:30 a.m. Wednesday, when the Texas athletic director walked out of an interview with the North Carolina coach at the Four Seasons Hotel in Atlanta.

He turned to UT Regent Tom Hicks and said, “This is the guy.”

That was the easy part.

Texas offered Brown the job later Wednesday, and — contrary to wire service and television reports — he flew home to Chapel Hill unsure if he would accept Texas’ offer, torn between the potential of Texas and his loyalty to UNC. After a tearful meeting with his players Thursday afternoon — after which, one observer noted, “You could have swum laps in his eyes” — Brown called Texas with his answer.

Dodds remembers that minute, too. It was 3:35 p.m. CST on Thursday, when the University of Texas and the folksy 46-year-old from Cookeville, Tenn., became what Dodds called “the perfect fit.”