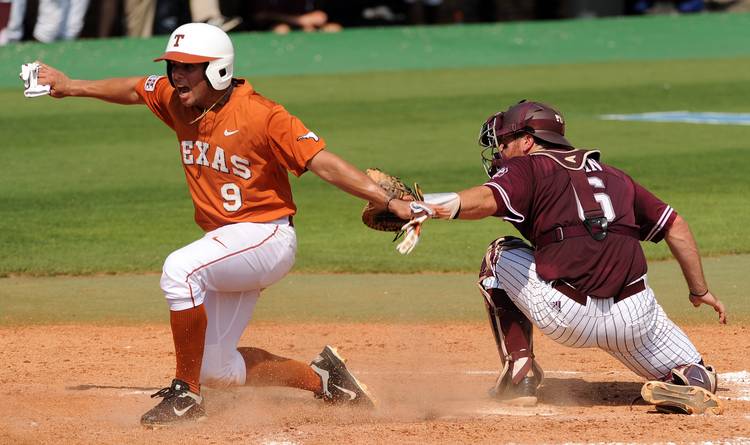 When Texas and Texas A&M meet at UFCU Disch-Falk Field on Saturday, more than bragging rights will be on the line.

Texas (38-20) and Texas A&M (40-20) are set to play at 6 p.m. in the winner’s bracket of a regional that is being hosted by UT. On Friday, the Longhorns recorded a 10-0 shutout of Texas Southern in their postseason opener. Meanwhile, Texas A&M earned a 10-3 win over Indiana.

Saturday’s stakes might be among the biggest in the history of this storied rivalry. Texas and Texas A&M’s baseball, softball, volleyball and soccer teams have only met 15 times in the NCAA tournament. The men’s and women’s basketball teams are still awaiting their first showdowns in the NCAA tournament. The Longhorns and Aggies have also never battled in a bowl game.

Here is a look at the rivalry between Texas and Texas A&M’s athletic departments and the times the two schools have met in the NCAA tournament:

Heading into this weekend, the Longhorns and Aggies had only met three times in baseball’s postseason. At a Houston-hosted regional in 2014, Texas took two of the three games it played against Texas A&M. A 4-1 win on June 2 eliminated the Aggies and advanced Texas to a super regional.

Said Clemens: “I was there. It was a lot of fun. It’s definitely a competitive environment, especially when we play against them. You’re going to see a lot of emotion out of our guys and out of me. It’s going to be a lot of fun. I’m excited.”

Texas A&M ended UT’s softball seasons in 2002, 2016 and 2017. Among the Aggies’ three postseason wins over the Longhorns was a 3-1 conquest that was recorded during Texas A&M’s journey to the College World Series in 2017.

Texas did open its 2016 appearance in the NCAA tournament with a 5-0 win at Texas A&M’s expense.

In 2012, Texas recorded a 3-1 victory in a second-round match that was played in Austin. UT went onto claim a national championship. Texas A&M and Michigan were the only two teams to win a set against the Longhorns during that postseason.

The Aggies have an unquestioned edge in the soccer series between the rival schools. Texas, though, can claim the biggest win. In 2007, UT traveled to College Station and recorded a 3-2 triumph over a Texas A&M team that was ranked second in the nation. That victory came six days after UT upset the Aggies in the Big 12’s title match.

The men’s basketball teams from Texas and Texas A&M have never met in the NCAA tournament.

The women’s basketball teams from Texas and Texas A&M have never met in the NCAA tournament.

The football teams from Texas and Texas A&M have never met in a bowl game.