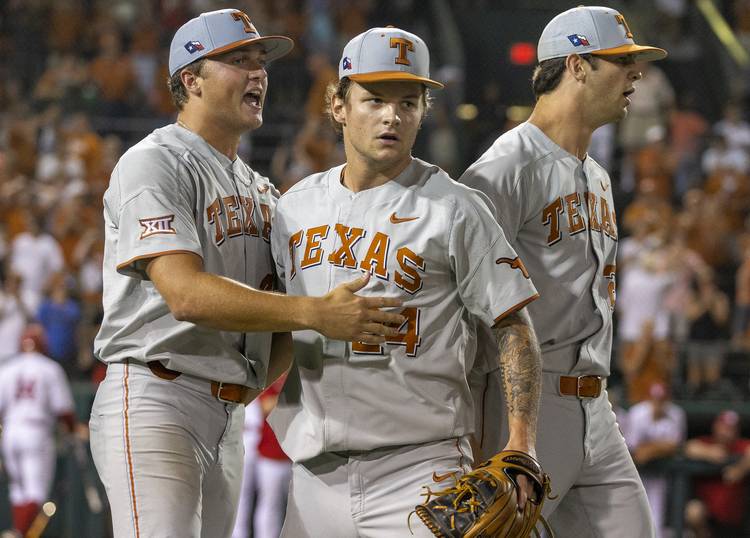 Texas closer Chase Shugart, (24) celebrates a 3-2 win over Indiana with Andy McGuire and Blair Henley during an NCAA regional game at UFCU Disch-Falk Field on June 3, 2018. (Stephen Spillman / for American-Statesman)

Like teammate Nolan Kingham, Texas junior Chase Shugart didn’t have to wait long on Wednesday to get a call from the major leagues.

SHUG! @cshug2 has been selected by the @RedSox! #HookEm 🤘 pic.twitter.com/jJqJpB2wYA

Shugart spent his first two years of college as a reliever, but he has been used as UT’s No. 2 starter throughout much of this season. With his extended workload, Shugart has gone 5-3 with a 4.36 ERA. He has struck out 58 batters while issuing 35 walks in 84 2/3 innings. Shugart can throw a fastball, change-up, curveball and slider.

To open UT’s run in the NCAA tournament, Shugart threw six shutout innings against Texas Southern on June 1. Two days later, Shugart picked up a save in a regional-clinching win. Against the Hoosiers, Shugart struck out the two batters he faced after inheriting a bases-loaded situation in the ninth inning.

Shugart will have until July 6 to decide if he wants to sign with the Red Sox or return to Texas for his senior year.

After a successful return to the mound, Josh Sawyer selected by Chicago Cubs in MLB Draft