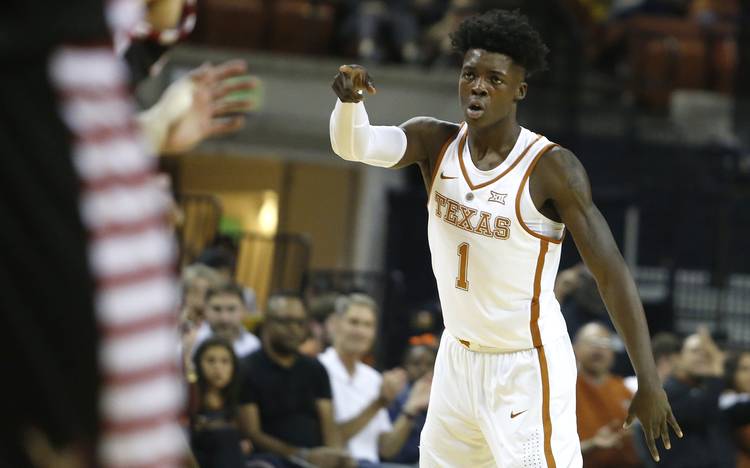 Strictly from a basketball perspective, Andrew Jones’ first step on the road back to the Longhorns was an obvious one. He needed to get back in school.

Jones, who is battling leukemia, left the Texas basketball program last January after his diagnosis and eventually pulled out of school all together. On Thursday, the first day of summer school, UT coach Shaka Smart announced that Jones has enrolled in web-based coursework at UT.

“Andrew continues to receive treatment, but this is another positive step in his recovery,” Smart said in a statement. “He will move into a dorm room, which will allow him to have a home base here during the times he is on campus. It will be great to have him around more, as he continues his fight.”

Smart also tweeted a photo of him posing with Jones and Dylan Osetkowski. It was the coach’s first tweet from his official account since October 2011.

Jones is still undergoing outpatient treatment in Houston, so he may not be in Austin on a full-time basis yet. As an enrolled student, Jones will have full access to the UT basketball facility.

Excited to have our guy @DrewdotCash back in the building! #hookem pic.twitter.com/xrAP9OkaBT

Anyone who follows Jones on social media knows the athletic guard from Irving believes he will one day wear burnt orange again. He’s constantly posting short videos with inspirational messages about a speedy recovery.

Still, team doctors will probably want Jones taking as long as he needs before returning to competition.

At this point, it’s unclear whether Jones will return for the 2018-19 season, or whether he’d even be cleared for competition due to NCAA academic rules. Players must maintain a certain progress toward a degree each year to remain eligible. The longer Jones missed school, the harder it would be for him to return.

Thus, Thursday’s news was a major step in Jones’ road back to the Longhorns. Texas has continued to hold his scholarship slot throughout this process.