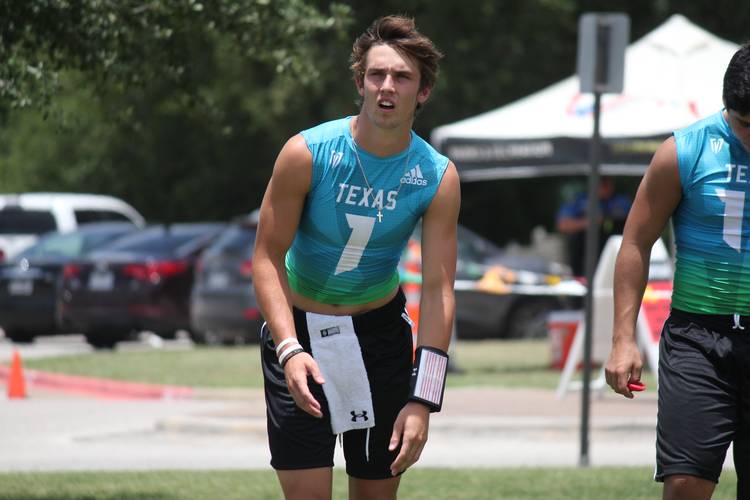 COLLEGE STATION — Most of the top talent in Texas is currently collected in College Station for the Texas State 7on7 Championship. The Class 6A and 5A programs are lumped into the same division for the purposes of the tournament and Friday brought the beginning of pool play for some of the state’s top programs. Texas commit Jordan Whittington played in the Division II tournament, which concluded Friday morning.

Among the players involved in Division I pool play on Friday afternoon were Texas commits Jared Wiley and Hudson Card. Wiley, who will enroll early and play tight end at Texas, starts at quarterback for Temple. He led his team to an opening win against Sachse before falling in the final two games, landing the Wildcats in the consolation bracket.

Card, the lone 2020 commitment for the Longhorns, is making a permanent move from wide receiver to quarterback. He was a member of the 7-on-7 squad that won a state championship last year for Lake Travis. He’s embraced his new role, for Lake Travis and as the leader of Texas’ 2020 recruiting class.

“It’s different as a quarterback and leader. I’m looking forward to the new role,” he said Friday in College Station. “I want the 2020 class to rally around me.”

While most prospects his age are still collecting offers and trimming lists, Card is focused squarely on helping Lake Travis win a state title.

“It feels good knowing where I’m going. I’m able to focus on our high school team and winning championships,” Card said. “It’s one less distraction. I knew where I wanted to go, so I committed. “

Everyone involved understands 7-on-7 success doesn’t automatically suggest victories once the pads are on. Still, it’s safe to assume that Lake Travis is a favorite to win the Class 6A Division I state title in 2018 after coming up short in the 2017 title game against Allen. Card played quarterback for most of that game, replacing an injured Matthew Baldwin, who is now a quarterback at Ohio State.

“I can improve my whole game from passing to running,” Card said. “Also, becoming more of a leader and rallying the team behind me.”

One player Card hopes Texas can land in the 2020 class is Hebron safety Darius Snow. The 6-foot, 216-pound four-star is one of three safeties in his class with an offer from Texas. He’s known as a hard-hitting enforcer at the safety position. He uses 7-on-7 to refine his coverage skills.

It helps with technique because you can’t be as physical, especially in school 7-on-7. It helps me focus on my footwork and technique,” said Snow of 7-on-7. “It also helps with coverages because it becomes a second form of practice. It also helps chemistry because communication is a key in the secondary.”

Snow already holds 19 offers and is in no rush to close his recruitment. He’s spent time this summer visiting schools that offered him during his sophomore year and preparing for his junior campaign. He’s no longer an underclassman and is ready for the challenges ahead.

“One thing my mom told me at a young age was to live, love and lead. Last year, I was the youngest player on the team,” he said. “I’m older now and proved I can play varsity football. I’m going from a learner to a teacher and I’m growing into that role.”

Expect Texas to remain in the mix for Snow because of his growing relationship with assistant coach Craig Naivar and the defensive system deployed by Texas defensive coordinator Todd Orlando.

“Texas’ defense is unique because of the dime. They use six defensive backs. The NFL is a passing league and so is the Big 12, so it puts guys like me in a good position for the next level,” said Snow. “Coach Naivar is a great guy and our relationship is building. I have nothing but love for Texas.”