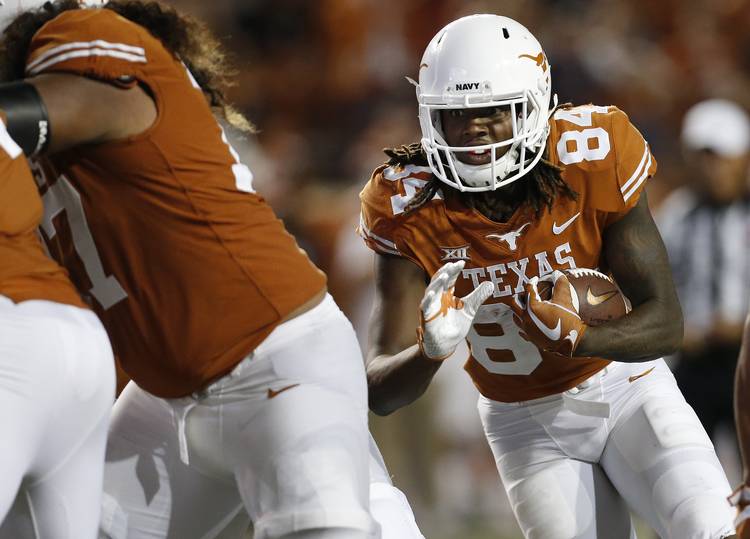 FRISCO — Texas athletic director Chris Del Conte said he was “proud” of receiver Lil’Jordan Humphrey expressing his views on race and society in a poem for a class project.

Humphrey, who posted his poem on Twitter, said America is a place “where black people can die from just being black and free.”

“They protest to be able to live life in peace like the majority,” Humphrey wrote. “Thugs and animalistic people is all you see. In reality, all they really want in life is equality”

At Big 12 media days, Del Conte said Tuesday that Humphrey, a junior from Southlake, was “talking about what it was like being a young person today.”

A Lil piece of my mind pic.twitter.com/khNhvryK2f

“I don’t walk in his shoes,” Del Conte said. “When you have a young man saying, ‘This is what I’m feeling today,’ it’s no different than music. If you look at listen to the music of the ’60s and ’70s, what is the music about? What was going on in the times and society?

“What makes America great is that it’s all walks of life,” Del Conte continued. “We’re a country of immigrants coming together to form a country, and we respect everyone’s opinions and views and where they come form. Today, we’re not there.

“This kid is just saying, ‘Hey, I’m feeling this way.’ And he wrote a poem for class,” he added. “I was proud of him for doing that.”

“I was proud of him. I was proud of him for expressing his feelings,” Herman said. “He wrote it, and he felt like he wanted to post it and share it. I support it. I think that’s the beauty of social media.”

Listed below is the complete text of Lil’Jordan Humphrey’s poem posted on Twitter:

America, America, the land of the free

Where black people can die from just being black and free

Thugs and animalistic people is all you see

In reality, all they really want in life is equality

Instead, America which is the land of the free

To restore the long legacy of white supremacy

Minorities were never a part of the American dream

They were only brought here to build your dream

I used to believe in this American dream

Dream that one I would be playing in front of thousand, on a college team

I have achieved that dream

And believe that, it was only a scheme

For you to continue to exploit black men

To continue to view them as animals, Then

Have the nerve to say ‘Make America Great Again’

It was only great for white men

You on the other hand just want free labor again

So, you can continue to try to find new and creative ways to enslave black men

Big 12 media days: recruiting, filibustering, the Masters and a mullet