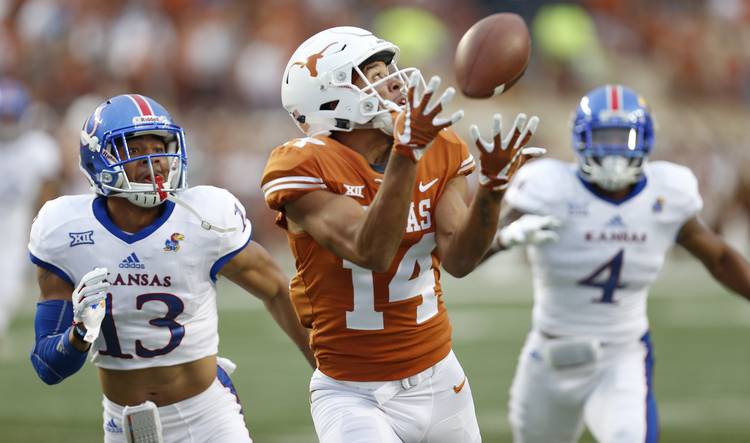 Texas wide receiver Lorenzo Joe (14) pulls in a touchdown reception on the first play of the game past Kansas defenders Hasan Defense (13) and Shaquille Richmond (4) in the first half of a Big 12 Conference football game at Royal-Memorial Stadium, Saturday, Oct. 21, 2017. (Stephen Spillman / for American-Statesman)

Former Texas receiver Lorenzo Joe is scheduled to be in court on Aug. 20 after being arrested and charged with misdemeanor driving while intoxicated in early July.

According to an arrest affidavit filed by UT police, Joe was driving a 2016 Dodge Charger near the 2600 block of Guadalupe Street early July 7. He nearly hit a pedestrian who was walking through the southwest corner of 27th and Guadalupe Streets. Joe’s car was then almost struck by another vehicle.

Joe told the arresting officer he had consumed three 16-ounce bottles of Michelob Ultra. He was given a breathalyzer test at 4:11 a.m. and blew a .148, almost twice the legal limit. Joe was booked into custody at the Travis County jail at 9:25 a.m. and later released on a personal bond, according to records.

The report states that Joe was talkative and cooperative although there was a “strong” odor of alcohol and he had “bloodshot, watery” eyes. Four other passengers were listed as being in the backseat, although their names were not included in the report.

Joe, originally from Abilene, finished his UT playing career last season. He started 12 of the last 13 games in 2017. Joe caught 35 passes for 457 yards in 45 career games with the Longhorns.