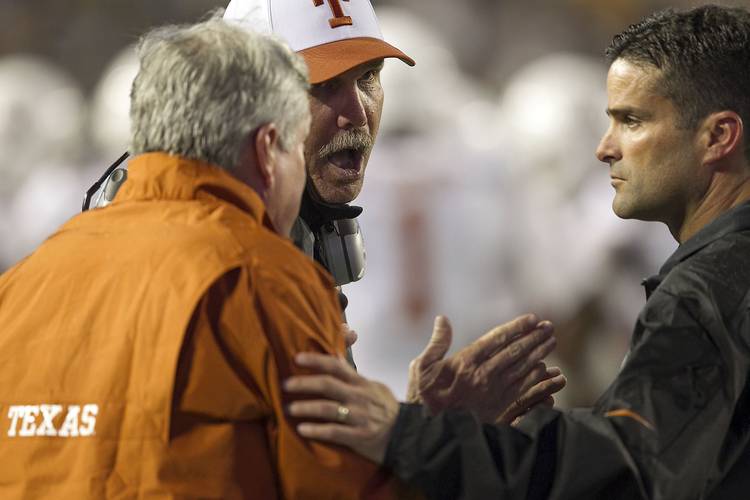 That’s a strong statement, and if true, Orlando may wonder why Clemson’s defensive coordinator, Brent Venables, just signed a five-year, $11.6 million deal a few weeks ago.

But it’s not just Orlando that highlights the current staff. Oscar Giles has been one of the better defensive line coaches, and recruiters, for a while and Stan Drayton, the running back coach, helped Ohio State rush its way to a title in 2014.

This current coaching staff has talent and for all we know there are future head coaches at every spot, but what was the best collection of coaches on staff for Texas?

First, we’ll preface this and say we’re starting with the Darrell Royal era and we’re stopping with the Charlie Strong era to give us time span. Here are five of the best coaching staffs Texas ever assembled:

The Longhorns coaching staff included one of the best offensive coordinators in program history – Greg Davis – and included one of the former deans of DBU, Duane Akina, as co-defensive coordinator. But the star of Mack Brown’s staff this year was Gene Chizik, who would go on to be a head coach at Iowa State and Auburn, where he won a national title. This staff also featured Giles, Mike Tolleson (special teams), Mac McWhorter (offensive line), Bobby Kennedy (wide receivers), Ken Rucker ( running backs) and tight end coach Bruce Chambers.

Yes, unsurprisingly the best team of the last 30 years at Texas had a great coaching staff.

Akers and Campbell were on staff along with several members of the 1972 team including  Manley, Patterson, Will Zapalac and Ellington, but this staff also included Emory Bellard as the offensive coordinator, and Bellard invented the wishbone offense in 1968 as the offensive coordinator and changed football forever. He would go on to coach Texas A&M.

Brown’s first staff at Texas included Davis, longtime defensive coordinator Carl Reese and future Texas State head coach Everett Withers. But perhaps the biggest star of this staff was tight end coach Tim Brewster, who had been on Brown’s staff for nine years at North Carolina. A master recruiter who helped Brown land some of the best players in Texas history, Brewster was eventually hired as head coach of Minnesota. He is now the tight ends coach for Texas A&M.