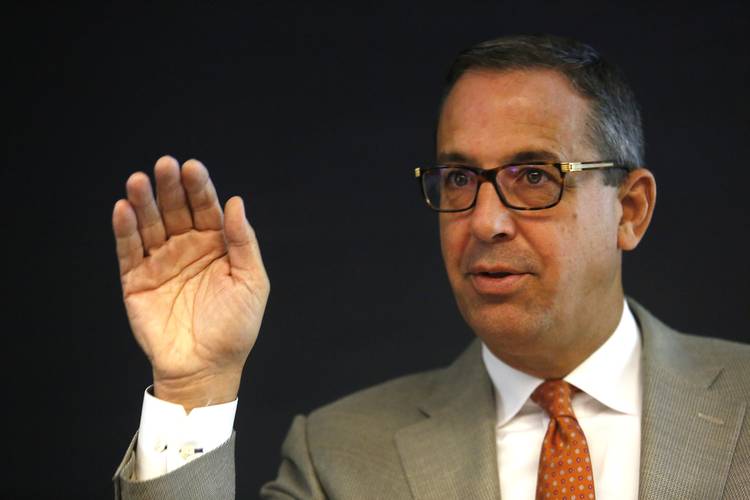 University of Texas athletics director Chris Del Conte speaks at a Q&A session with a statewide group of media at the Austin American-Statesman in Austin on Friday, Aug. 3, 2018. ALYSSA VIDALES/AMERICAN-STATSEMAN

Texas athletic director Chris Del Conte is one of the Big 12’s most accessible and progressive administrators. He’s something of an open book, as sports editors from around the state discovered Friday during a panel discussion at the American-Statesman.

“Well, pretty excited to be here. Austin, Texas,” Del Conte said. “Shoot, any questions you want. Have at it. It’s all on the record.”

The following text has been condensed and edited for space.

On Title IX-related incidents at Michigan State and Ohio State: “It’s interesting to me. Every time there’s something that goes along the lines anywhere in the country, the first thing you go back and assess within your own staff of what you do to education. You’re constantly doing education and having discussions about it.

“Yesterday, news broke this week and the first thing I did today right afterward was get our Title IX training, put all that stuff in a compilation email and send that right back out to our staff. We constantly train and educate, but it’s no different.

“In the ’80s, it was Mothers Against Drunk Drivers. It was all the advertising. Don’t drink and drive. How many times have you had a beer or a glass of wine and went back home? Maybe no one in this room, but it happens all the time. So you just never know when the shoe’s gonna drop, but you’ve got to constantly educate.”

On the importance of women’s athletics at Texas: “You go back and read a book called Winning by Jack Welch. I read all these books, and one of his books, Winning, is that when he took over General Electric, what did he do? He dropped a bunch of, or spun off, a bunch of things that weren’t (number) one or two in revenue. What happened? He spun them off, the stock market goes through the roof and he’s hailed a hero.

“In college athletics, I’m bound by Title IX which was a federally mandated law that was not funded. It’s the best thing that’s ever happened to college athletics, not only because it created opportunity for women to participate, but it also put a cap on football in terms of the number of scholarships you can give.

“What has that cap done? Created parity. What is creating parity? It creates interest in your game across the country, and TV revenues go up. So I always tell everyone that we, our athletic program, may have only two enterprises that run our entire athletic program but every single sport accentuates our institution brand. And women’s athletics at the University of Texas has done yeoman’s job of accentuating our brand across the country. That is spectacular.”

On sports gambling: “Years ago, we thought that gambling was only going to be in Las Vegas. Then New Jersey got it. So we said, ‘Oh gosh, only those two players are casinos.’ I think there are 35 states that have casinos now. It’s an evolution of what is happening.

On NCAA-mandated injury reports: “I just haven’t dug deep enough into that because I want to see how the dust settles and what is right and wrong. We are still an enterprise based on educating young people. Two percent of our students athlete University of Texas will go pro. The rest will become doctors, lawyers, productive citizens in our country, so we focus on that.

“My goal and my thought it not to enhance the gaming industry by producing a report that says here’s someone hurt or not hurt. That’s not my interest.”

On a new game-day atmosphere at Royal-Memorial Stadium: “We have a beautiful LBJ lawn. What is germane to Austin? Food trucks, music and outdoor recreation. Well, we’re going to create Longhorn Live. Instead of ACL, we’re gonna have Longhorn Live and have concerts out there before the game. We have 28,000 students that live in west campus. We’ve got to get them to come earlier. They like to hang out and cocktail over there because they’re 18, 19, not 21 yet, and then they’ll roll over. So we’ve got to have things for them to do.

“You’ve got to create events that say win, lose or draw, I’m coming back next week because that was a hell of an experience. That’s my job.”

On keeping the in-game weather reports: “Next comment. Why you busting my chops? We know it’s hot, dang it.”

On a new Texas basketball arena: “We average about 9,000 for a home men’s basketball game. The stadium seats 16,000. It’s just too big. Our game times are at 8 o’clock. Interstate 35 is pretty hard to come back on at 8 o’clock. Television has made it so easy, you get a 60 or 80-inch TV at Ikea where you can never leave your couch.

“The Drum has been great for us, the Erwin Center has been great, but I think that was built in ’76. It’s had its time, but we have to do that in a thoughtful manner. And that’s just where we’re at right now.”

On building a smaller arena: “Now this is just my mind, no one else’s mind, so let’s just start with that. But there has to be, if you start with a lower bowl that seats say 10,000. You know that upper rake, couldn’t you have a garage door that comes down that’s padded? You never see those seats.

“Somehow a garage door comes down right now and you never see my garage. Imagine if it was padded. You’d never open it up. Now, you have a 10,000 seat basketball stadium. You’re playing in the Spurs’ arena, close the gates on the upper rake and then open them up when you have a concert. Why can’t you do that?

“No one ever thought you’d go from the 8-track to the cassette to the Discman to an iPod to the phone. … Someone’s going to find that technology at some point and time that works for everybody.”