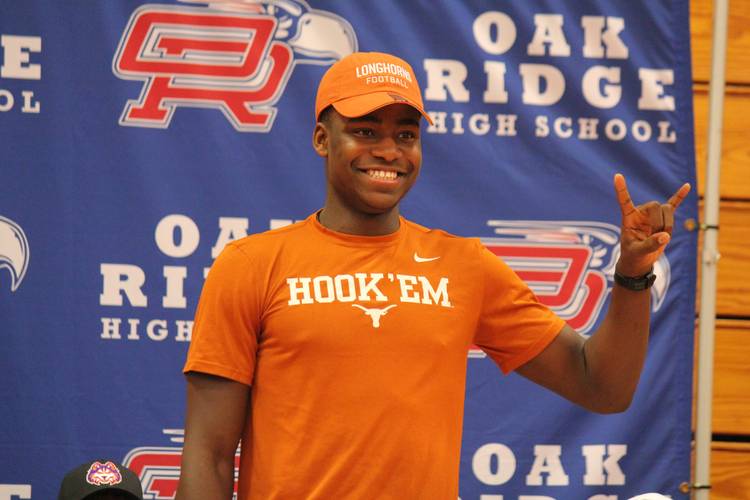 Texas held its fifth practice of the season on Wednesday, and the media was granted access to around 20 minutes of drills. Here are three observations:

1. Texas practiced in full pads for the first time, but there wasn’t much contact in Wednesday’s media window. As media members exited the Whitaker Complex, however, tempers flared as defensive back P.J. Locke III tackled receiver Collin Johnson.

Three onlookers likely approved of Locke’s takedown.  Ex-UT defensive backs Earl Thomas, Aaron Ross and Michael Huff were all in attendance on Wednesday. Thomas, Ross and Huff represent three of UT’s last four finalists for the Thorpe Award, which is given annually to the nation’s top defensive back.

Huff works as a quality control coach at Texas. Ross has also been spotted at many practices since Tom Herman’s hire. (Both Huff and Ross last played in the NFL in 2013). The sight of Thomas in Austin in August, however, is a bit unusual.

Thomas is one of five ex-Longhorns on the Seattle Seahawks’ roster. Thomas, though, is not in Seattle’s training camp as he has asked for the Seahawks to either give him a new contract or trade him. Last week, Thomas wrote about his holdout in the Players’ Tribune.

Freshmen linebackers Joseph Ossai and Luke Brockermeyer are both wearing No. 46 for the Longhorns this month. Of the newcomers, Ossai has the better shot at playing in 2018. The four-star recruit from Conroe ran with the second-string defense on Wednesday as a stand-up defensive lineman (aka Malcolm Roach’s back-up).

Brockermeyer, a walk-on and the son of ex-Texas offensive lineman Blake Brockermeyer, worked out in front of bystanders with the No. 4 defense.

Ton Herman says Jeffrey McCulloch strained a pec and will be out for “a couple of weeks.”

In other news about freshmen linebackers, Herman told reporters after practice that defensive back DeMarvion Overshown is currently moonlighting as a linebacker. The 6-3, 210-pound Overshown is filling in for Jeffrey McCulloch, who has suffered a pectoral injury. McCulloch is will be sidelined for a few weeks.

Rowland was benched at one point during his first season at Texas, which featured the Mississippi Gulf Coast Community College transfer hitting 11 of his 18 field goals. A Lake Travis product, Dicker was one of the highest-rated kickers in the 2018 recruiting class.

Texas kickers haven’t been showcased much during media windows this month. On Sunday, Herman said field goals and PAT attempts had been worked on over UT’s first three practices. The state of the kicking game, though, hadn’t really been analyzed that much.

“I won’t worry about that for a while,” Herman said.