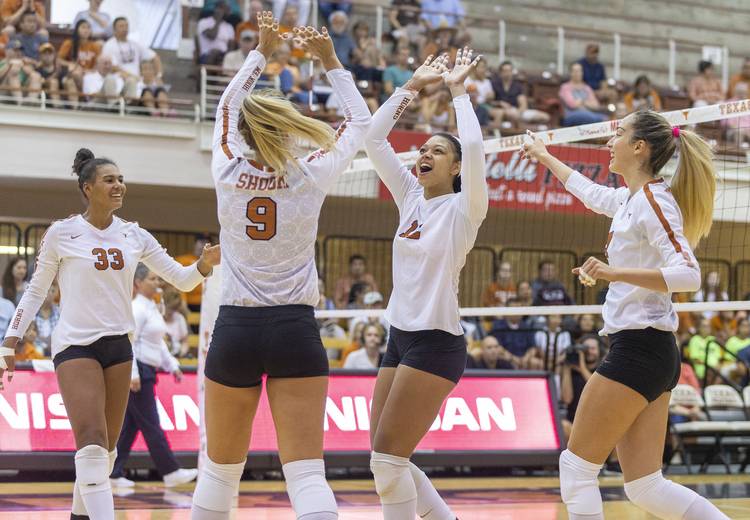 The first impression for the Class of 2022 was a good one.

Freshman outside hitter Logan Eggleston collected a double-double in her debut at Gregory Gym and Sydney Petersen donned the libero jersey in the Orange-White Scrimmage on Saturday. Behind Eggleston, the White team comprised of expected starters and contributors posted a 25-13, 25-21, 23-25 win over an Orange squad that played back-ups and ex-UT standouts Ebony Nwanebu and Juliann Johnson.

The annual intrasquad showdown was a precursor to Texas’ season opener against Oregon on Aug. 24. The Longhorns and Ducks will meet as part of the Nebraska-hosted VERT Challenge. UT, the third-ranked team in the AVCA preseason poll, is set to play No. 7 Florida the following day.

Freshman middle blocker Brionne Butler, who redshirted in 2017, led all players with her eight blocks.

“I really liked what I saw today (from the freshmen),” Texas coach Jerritt Elliott said. “As I was watching, I was just trying to see if I would notice if their behavior and their attitudes and their body language showed that they are freshmen. I didn’t see that at all. They were just steady in their communication, their routines we really good. That’s a good sign for us.”

Outside hitter Micaya White and middle blocker Blair Westerlund did not participate in the scrimmage. Elliott downplayed the inactivity and told reporters that both players were “just resting right now.” Texas expects White, a two-time All-American and the Big 12’s preseason player of the year, to play against Oregon.