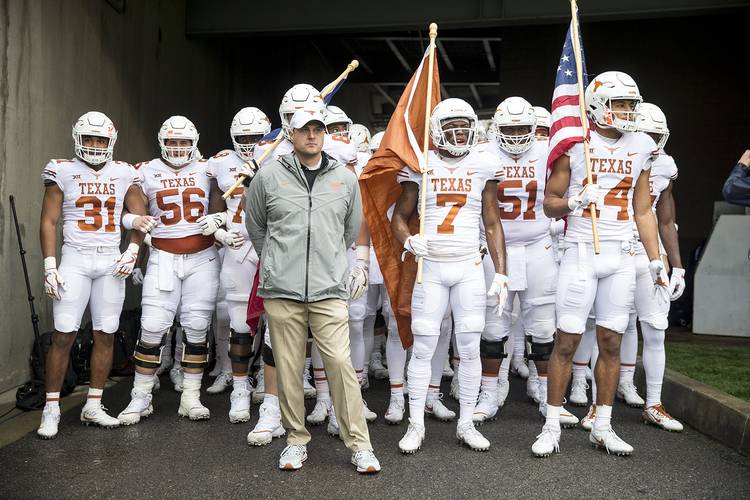 Texas head coach Tom Herman waits with the team at the entrance of the tunnel before an NCAA college football game in Morgantown, West Virginia, on Saturday, Nov. 18, 2017. NICK WAGNER / AMERICAN-STATESMAN

For the second straight year, voters in the Associated Press Top 25 poll are giving Texas the benefit of the doubt.

The Longhorns debuted at No. 23 in the AP Top 25 preseason poll unveiled Monday. This comes after the team was ranked 21st in the preseason Amway coaches poll.

It’s the second straight year UT started in the Top 25. Last season, UT was 23rd but dropped out after the season-opening loss to Maryland and went on to a 7-6 season.

In the four years of the College Football Playoffs, no team has started outside the top 20 in the AP poll and gone on to reach the national semifinals.

Alabama is the preseason No. 1 followed by Clemson, Georgia and Wisconsin. Oklahoma is the highest ranked Big 12 team at No. 7 followed by TCU (No. 16) and West Virginia (No. 17).

If nothing else, the AP Top 25 signifies the national believe that second-year coach Tom Herman will get things turned around. The Longhorns did not make the preseason rankings during Charlie Strong’s three-year tenure.

Sam to start: ‘Barring any sort of catastrophe,’ Texas to go with Ehlinger against Maryland