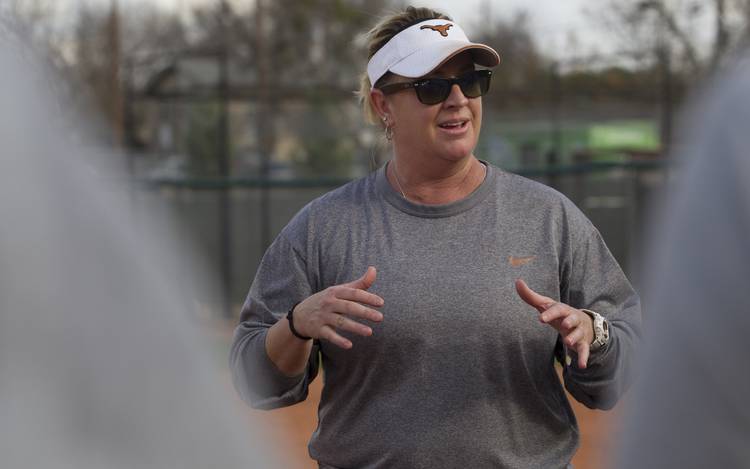 Former Texas assistant coach Jennifer McFalls speaks to the team during a softball practice at McCombs Field on Jan. 12, 2017. McFalls has been hired at Kansas. (Stephen Spillman / for AMERICAN-STATESMAN)

For the past eight seasons, Jennifer McFalls tried to find ways to help Texas win softball games. In 2019, she’ll attempt to beat the Longhorns.

McFalls was named the head coach of Kansas’ softball program on Monday. This is the first head coaching job for McFalls, a Texas A&M graduate who was as an assistant coach at Texas from 2011-18. With McFalls tutoring its defense, Texas ranked 12th nationally in fielding percentage in 2018.

McFalls was not retained at Texas after longtime coach Connie Clark resigned her post in May. Tripp MacKay, the other assistant on Clark’s staff, has since been hired to lead Kennesaw State’s softball team.

“I have all the confidence in the world that Coach McFalls will lead KU softball to great heights,” Clark said in a statement posted on Kansas’ website. “She is obviously savvy to the Big 12 way of doing business.  She has high expectations, and can tap into success within the KU family, which is well supported.”

McFalls replaces Megan Smith, who left Kansas for the same job at Marshall. Kansas last reached the NCAA tournament in 2015 and went 27-25 this past season. Three of those losses were recorded in Austin by a combined score of 18-4.