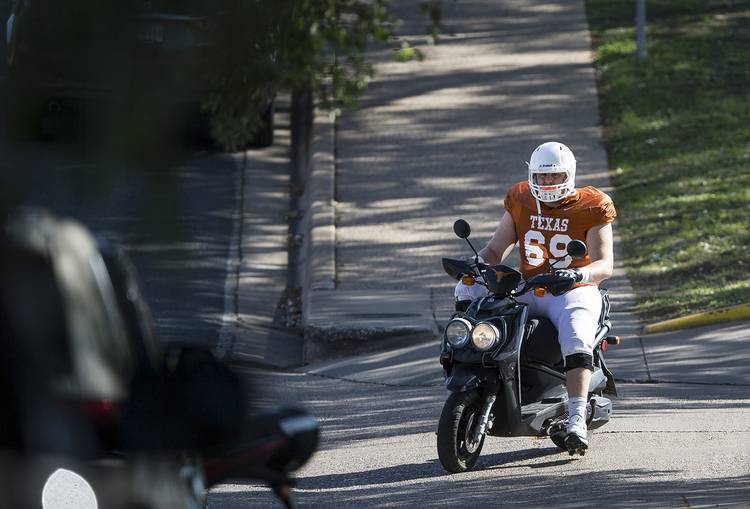 Texas offensive lineman Austin Allsup (69) arrives on a scooter to a football practice at the Denius Fields on April 17, 2018. NICK WAGNER / AMERICAN-STATESMAN

For the second time this week, Texas has awarded a walk-on with a scholarship.

In a team meeting on Saturday, senior offensive lineman Austin Allsup received a scholarship. Texas senior Andrew Beck, who was also named a team captain on Saturday, made the announcement. After the declaration, the Longhorns celebrated with Allsup in a video the team posted on its Twitter page.

🚨Scholarship Alert🚨 "As a walk-on you always hope your work is recognized. You always kind of hope this day comes but you never really expect it. I can't believe this happened". Congratulations @Austin_Allsup on your scholarship! #ThisIsTexas #HookEm pic.twitter.com/NLLKsvSuzL

Allsup walked onto the football team during the spring of 2016. After serving on the team’s practice squad that fall, Allsup appeared in UT’s routs of San Jose State and Baylor in 2017. He also played in a 42-27 win over Kansas.

Allsup, who is studying architectural engineering, hails from Lorena.

UPDATE: Texas wide receiver Philipp Moeller was also given a scholarship on Friday. A senior from Plano, Moeller has appeared in one game since his arrival at Texas in 2015.

"I just want to make my family proud. You guys took me in. You guys treat me with respect. That means so much to me". Congratulations, Philipp Moeller, you're now on scholarship! #ThisIsTexas #HookEm @pmoeller85 pic.twitter.com/hcz9Z3YjRi